A solution for Abyei only to be found from within

Abyei now lives on a hot tin roof after Sudan and South Sudan came close to war in April after border fighting escalated.

The council’s May 2 resolution demanded both sides had to pull their forces out of Abyei by May 16. South Sudan complied, withdrawing its police forces from Abyei on May 11, the UN says.

On June 1, Sudan said it as well had pulled its police forces from the disputed border region, a move to ease the ongoing peace talks between the two countries in Addis Ababa. 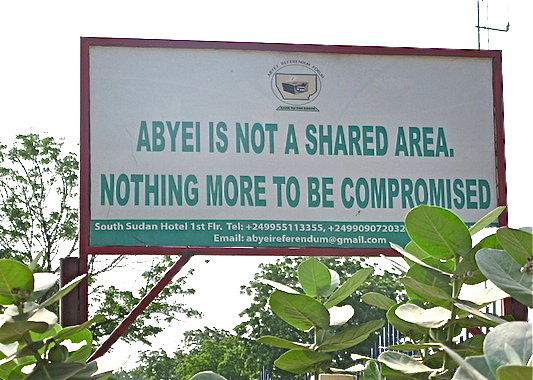 The lingering dilemma of Abyei’s status leaves many Ngok Dinka in legal limbo.
© antheapAbyei has always been and will remain one of the heated topics of the Sudanese political arena.

Even during the six-year transitional period, when the two Sudans were governed by the Government of National Unity (GNU), comprising of National Congress Party (NCP) and Sudan People’s Liberation Movement (SPLM) representatives, some analysts and experts considered it like Kashmir: a centre of conflict and tension that ends only to start once again.

Abyei seems to be an issue people only remember in times of crises and during such times it will always be an unresolvable issue.

One of the drawbacks cited by many experts is the non-enforcement of the Abyei Protocol, especially the demarcation paragraph.

According to these experts the people of Abyei were supposed to be canvassed simultaneously with the Southern Sudan Referendum on Secession. Up to now, no referendum has been held in Abyei, leaving the citizen of the contested area without a voice.

However, the citizens are the people to bear the consequences in the absence of a permanent solution.

The prevailing view at that time was that both the South and North, with their long joint borders, were not willing to enter into a conflict for such a small area.

However, what happened a few years later contradicted this idea and bloody clashes took place more than once between the North and South, claiming many victims.

Villages of the two main ethnic groups living in the Abyei area, the Misseriya and the Dinka Ngok, have been burned and many Dinka Ngok and Misseriya have been displaced.

Border areas: between peaceful coexistence and conflict
Juba, Khartoum step up efforts to resolve Abyei
Ngok Dinka citizenship falls through cracks of post-split SudanThe Misseriya do not feel represented by the NCP, nor do the Dinka Ngok feel represented by the SPLM, hence the people living in the Abyei area for more than five centuries have not yet gathered to decide the fate of their homeland.

Some prominent figures of the Dinka Ngok living in Abyei have their own logic. Dr. Carlo Alweel, who believes that Sudan has, after the secession of South Sudan, lost all its resources and wealth. Why to insist on a small area of no more than 10,460 square kilometres? This is like a drowning man who clings to a straw.

Possibilities remain open. So, what is the international community’s next move? Will it impose international trusteeship over Abyei region? Are the Dinka Ngok or the Misseriya willing to accept this trusteeship? What is the practical solution for this conflict?

According to experts on this conflict, the solution lies in granting the citizens of Abyei the right to vote and more importantly to consult the Misseriya and the Dinka Ngok.

The Abyei problem can only be fundamentally resolved through the two ethnic groups’ agreement about the conflicting issues as they both are the real beneficiaries from achieving peace in the region and the first victims of its current stagnation.