Many Sudanese still harbour visions of gold as a source of wealth. But while traditional gold mining continues in parts of the country, dreamers of get-rich-quick schemes have come up short. The rudimentary tools used yield only small amounts of gold, according to those returning from traditional mining areas in Sudan’s Nile State. 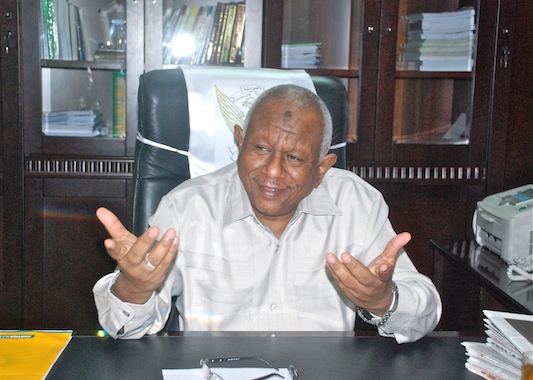 Several factors explain Sudan’s renewed fascination with gold, whose rising prices on the global market provide considerable motivation in times of economic crisis. Significant progress in metal detection in recent years was instrumental in the discovery of large amounts of sedimentary gold under the earth’s surface. Iimproved infrastructure, especially roads, has eased access to remote areas rich in gold.

Dr Gailani recognises the negative environmental impacts of both traditional gold mining and oil exploration. But he believes they could be mitigated through sound management.

Domestic mining (an activity relying on rudimentary technology to extract various minerals) is a well-known activity that is as old as history, he said. Gold mining in Sudan dates back to Pharoanic times.

Gold’s contribution to Sudan’s treasury will amount to $4 billion this year, in addition to another billion dollars from other metals,” said al-Jilani.

The other side of the gold coin

Experts refer to several negative aspects of traditional gold exploration in Sudan’s rural areas, among them security threats to local residents and environmental degradation that has prompted calls to halt mining activities. 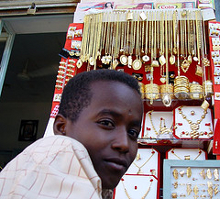 Sales staff at an Omdurman gold shop.   Photo by: FlickrJunkieDr Gailani said prospecting will not stop, but operations will be downsized.

At a recent seminar on mining, analysts shed light on the challenge of integrating gold extraction into Sudan’s economy. Given the illegality of numerous mining operations, along with the transient nature of these marginalised activities as miners travel from one region to another, fee collection and monitoring by the state are all the more difficult.

The reluctance of financial institutions to purchase gold from miners, they add, has opened the door to smuggling.

Citing a boost of foreign currency totaling one billion U.S. dollars from export returns in the past year, economist Adel Abdul-Aziz pointed to the benefits of domestic mining, adding returns could total three billion dollars this year.

"The government should promote traditional gold mining as an employment opportunity for young job seekers,” he said. 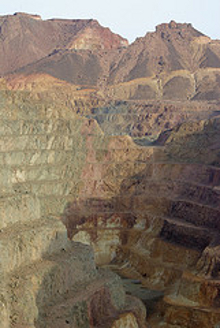 Another view of the Hassai Gold Mine.    Photo by: Francois Bouf

While currency figures may look promising, the view from the ground suggests otherwise.

In his view, the government's promotion of gold as an alternative to lost oil revenue is mere reassurance for northern citizens, and not based in reality.

Taib said the gold production he witnessed in Nile State cannot fill the revenue in Sudan’s economy. The government’s search for exploration companies, along with its appeal to existing operations to speed up production, he added, suggest the situation is not the way it has been described by some state officials.

Turning gold into economic power in northern Sudan needs years of ongoing exploration,” said Taib, before it can make a significant contribution to national income.”