Continued armed conflict, a failure to implement UN decisions, and a lack of security despite the presence of international troops are just a few of the factors contributing to the Darfur crisis. Saleh Mahmoud, a lawyer and member of the Central Committee of the Communist Party of Sudan, discussed these complex issues with Osman Shinger. 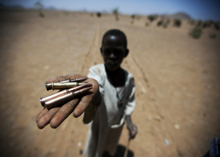 Q: How do you read Darfur’s status of in light of recent, violent confrontations?

MAHMOUD:  The situation is dire: more than three million displaced people have been living in refugee camps for about seven years. Given the lack of security and basic services, they are unable to return home. The problem is exacerbated by the expulsion of humanitarian aid groups in 2009; their absence puts those millions of lives in greater danger.  Neither the government nor the international community can provide the food, water and safety to the same extent as the aid groups.

It’s a known fact that the war in Darfur never ended. Not only did the Abuja agreement fail to provide peace and security to Darfuris; one could even say the accord has contributed to the deteriorating security situation in the province. Areas such as eastern Jebel Marra, Northern Darfur and even part of Southern Darfur were exposed to violent attacks after the signing of the agreement in 2006. This led to a continuous exodus toward refugee camps and major cities in the region.

Q: What are the regional dynamics of the Arab groups currently in conflict?

MAHMOUD: This is another critical point that’s often ignored. Kas al-Gharb, Jebel Marra, Zalengi and Wadi Salih have been scenes of recent fighting between the Rizeigat and their allies on one side, and the Misseriya and their allies on the other.  Since these groups are armed by the Sudanese government, their weapons are sophisticated and cause high numbers of casualties.

Q: What are the roots of these conflicts? Why are they breaking out now, and how can they be addressed?

For more background information read      "The Other War: Inter-Arab Conflict in Darfur" by the Small Arms Survey

MAHMOUD: Disputes over control of resources are common in Africa, especially when as grazing and agriculture are involved.  By contrast, I think the main problem in Darfur stems from the presence of weapons among Arab groups who resort to the use of arms no matter how small and insignificant a dispute may be. The government had long been warned against arming these groups because weapons usually obliterate the chance for peaceful conflict resolution.

Q: What core issues are crucial to establishing peace, if only a partial one, in Darfur?

The historical grievances of the people of Darfur must be recognised, regardless of their tribal affiliations. All African and Arab groups have been subject to marginalisation by the government of Sudan. Ever since independence, Darfuris have been deprived of basic services such as health, education, infrastructure and modern institutions. The government should not react to their demands militarily, but listen to the people.

Another injustice against Darfuris is that their general participation in the civil service has always been low. Darfur represents 25% of Sudan’s population. It should be recognised as one entity and one territory. Dividing it to three states led to the emergence of tribalism, which results in the clashes we’re seeing today. 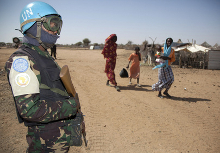 A UNAMID soldier in Khor Abeche, South Darfur. UN Photo: Albert Gonzalez FarranQ: The UN Security Council issued a number of decisions on Darfur that have not been implemented.  Why is that?

MAHMOUD: The UN Security Council's decisions are nothing but ink on paper. A lack of political will, coupled with special interests of the council’s five member countries, add up to a failure to follow through on the council’s fifteen decisions on Darfur, except for the involvement of the International Criminal Court (ICC) and the deployment of international forces. But these measures are not proceeding effectively.

Q: The international forces on the ground in Darfur cannot even provide security for their own soldiers. How can they possibly protect civilians?

MAHMOUD: The big mistake is that the nature of their deployment amounted to an imitation of the African Union's structures. In effect, the blue helmets simply replaced the green ones. The African Union forces faced the same difficulties now confronting the international troops. Lacking the necessary resources to protect themselves, they’re in no position to protect anyone else.

Q: How do you read the stance of the political opposition on the issue of Darfur? Is it in contact with the armed movements?

A: Yes, but it is unable to carry out its agenda.  The armed movements must open the doors of communication and negotiation with the political forces. The initiative has to come from the armed groups, even if they’re reluctant to take that step. It’s in the interest of the armed movements to be backed by the political forces on the national level. This is precisely why both sides must be receptive to one another if positive change is to develop in Darfur.