Elephants are among the animals under attack in South Sudan’s Western Equatoria State, where commercial poachers target them for their meat and tusks.

Wildlife in Western Equatoria State is in danger due to the need for wild animals’ meat. We know very well that the state has no cows and people need meat,” said Jimmy Marle, member of the regional wildlife force. 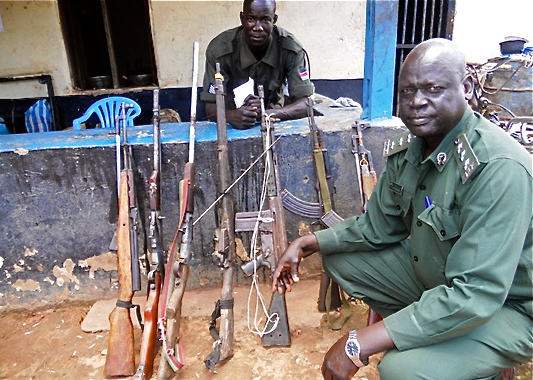 Wildlife Authority members in Yambio show the confiscated arms, used for poaching, May 7.
© The Niles | Joseph NashionElephants are among the five most endangered, hunted for their meat and their valuable tusks.

A recent aerial survey by the Wildlife Conservation Society discovered a large number of elephants in Ibba County around Maroko in a very thick bamboo plantation and in Bairakpoto game reserve which borders the Democratic Republic of Congo (DRC).

Although all these areas are protected by the wildlife forces, poachers have not been deterred.

Poachers cross up to DRC to kill, then they bring the meat and ivory for sell to South Sudan. They are causing a lot insecurity,” said Marle.

The state’s Wildlife Authorities are using local leaders and the media to sensitise locals about the need for conservation.

There are signs this policy is working: Last week a poacher was arrested in Yangiri Payam of Ezo County after killing an Elephant. We received a tip off from the local people about a man who had killed an elephant. We rushed there and arrested him together with his rifle and Ivory,” said Marle.

The carcass was left to rot as the people of Yangiri refused to eat the meat saying that the animal was like a human being who could have helped them in the future. 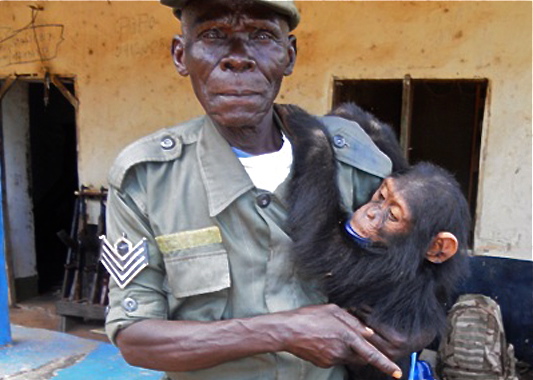 A member of the Wildlife Authority with a rescued monkey, May 7.
© The Niles | Joseph NashionThe three poachers will be taken to court for prosecution. The meat we take from the poachers is normally given out to the prison, the other remaining is sold at a giveaway price. For the elephant tusks, we wait for what the government will decide on, but we cannot sell it because this will encourage poaching,” Marle said.

In a bid to combat the rampant poaching of elephants and other animals in the state, patrol posts have been established around the game reserves and national parks. Officials carry out foot patrol on weekly basis.

Marle underlines the importance of conservation and touts wildlife as possible source of future revenue to help diversify the local economy. I assure my people of South Sudan: let us not look at oil only,” he said. Well maintained wildlife has the potential to generate enough revenue for the State, County and Payam.”

Before that happens, however, improved infrastructure is needed so that people could access the region’s national parks, sights and wildlife, he said.