Nzara County presents its production diversity during the agricultural fair in Yambio, October 23.

We are in a business world, companies may produce fake fertilisers that will destroy the nutrition of the soil to enable farmers buy fertilisers yearly‚” Bakosoro said, adding that poor farmers could not keep up with the cost of buying more fertiliser. 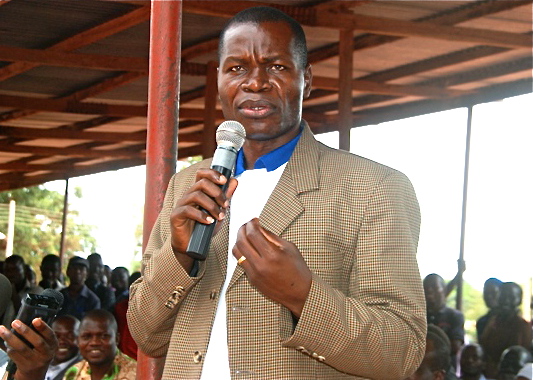 State Governor Bangasi Joseph Bakosoro speaking at a agricultural fair in Yambio, October 23.
© The Niles | Joseph NashionThe land of Western Equatoria is fertile with seasons and rains almost the whole year. Its farmers were traditionally practised subsistence farming but now they are trying to turn their hand to commercial farming.

The regional ministry of agriculture has not finalised its figures for crops grown in the first season. The state minister said he is optimistic that his region will regain its post-civil-war reputation as the country’s bread basket.

He argued that more research needs to be done into the spacing of seeds and planting the right kind of seeds in the right season.

A three-day agriculture fair held in the state recently aimed to boost knowledge about productivity and how to foster sustainable food security.

The state’s climate favours the growing of all sorts of crops, including cash crops like cotton, coffee, sun flowers, palm fruits. Animal husbandry is also on the rise in the state.

John Dominic, Agriculture Director of Nzara County, said this year was productive. The main challenge they face is the lack of pesticides and poor roads which impede access to local markets.

But some supported the use of the chemicals. Gabriel Peter Wande, who works with IFDC in Li Rangu Payam, explained the importance of the use of fertilisers, saying it benefited production.

Citing the benefits of GIP fertilisers for hybrid maize, he disagreed with the state government for not allowing the use of fertilisers.