Given mainstream society’s harsh rejection of same-sex relationships in Sudan, the double life led by the main character sums up what many gay Sudanese endure, whether the book’s harrowing plot is based on a true story or not.

Now a gay rights organisation is quietly campaigning for greater acceptance of homosexuality in Sudan. Its founder, who goes by the name Ali, knows all too well what it means to be punished for being different.” 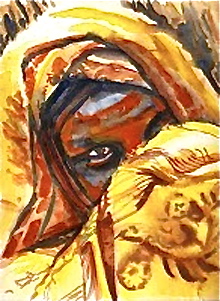 Sudan does not recognise same-sex relationships, which are illegal under Sharia law.Ali’s sexual orientation defined his life from early childhood.

His father began beating him on a daily basis when he noticed that his son’s behaviour was different from other boys his age. He thought the beatings would force his son to change, and when that didn’t happen, the abuse worsened.

As a reaction to the trauma, Ali turned mute. His mother, distraught by the abuse and her son’s inability to speak, decided to leave home and take him with her.

I thought everything was going to be easier then, but I was wrong,” Ali said. As I grew older, I discovered my identity and felt very lonely, so I entered a state of denial for a long time.”

The loneliness was depressing for Ali at school, especially when other boys bullied him. It was only when he started college that things changed for the better.

I found guys like me who share the same ideas,” he said. Together, we realised that others are also lonely and suffering because of their identity.”

That’s how Freedom Sudan, a gay rights organisation, was born in December 2006.

Campaigning for greater recognition of Sudan’s Lesbian, Gay, Bisexual and Transsexual (LGBT) community, the group offers an online forum for freedom of expression about LGBT issues.

As the group’s founder, Ali said the organisation is a source of hope, courage and advice for LGBTs in Sudan.

South Africa is the only country in the continent that recognises same-sex partnerships. Same-sex sexual activity is legal in just under half of all the countries in Africa.

Being gay in Sudan, a country governed by Sharia law, is fraught with stigma and risk. Homosexuality is illegal under Article 148 of the 1991 penal code. By law, first and second offences are punishable by lashing and, in some cases, stoning or imprisonment. A third offence can lead to capital punishment. For women, the death penalty applies to the fourth offence.

In August 2010, 19 men were lashed 30 times and fined 1,000 Sudanese pounds (nearly $375). Their offence: alleged cross-dressing and womanly behaviour” at a private party.

Abdel (not his real name), a Sudanese engineer in his 20s, said he does not recognise LGBTs as a legitimate community deserving human rights.

This movement contradicts the basic elements of humanity, which is that people of the opposite sex engage in relationships and reproduce,” he said.

In a society where discussion of sexuality is taboo and misinformation on the subject abounds, Abdel is probably not alone in his belief that HIV/AIDS is caused by homosexual activities, when it is in fact spread by unprotected sex with partners of either sex who are infected with the virus.

Freedom’s Sudan’s goals, as listed on the group’s website, include the recognition of homosexuality in Sudan, social acceptance of LGBTs and their human rights, and abrogation of the death penalty for homosexuals.

Maha, a 21 year-old Sudanese law student who wants to work in human rights when she finishes her degree, manages Freedom Sudan’s media and communications on a volunteer basis.

After graduation, she hopes to help Freedom Sudan drum up support from international LGBT organisations.

In the relative shelter of a virtual gathering, Freedom Sudan has grown from an online membership of 12 in 2006 to more than 400, with over 600 followers on Twitter.

Ali said he would like to establish an office in both Khartoum and in newly independent South Sudan. But LGBTs there don’t have it much easier.

Before January’s referendum that decided the country’s secession from the north, President Salva Kiir said the promise of equality” does not extend to LGBTs in South Sudan, and that same-sex preference is not in our character.”

Ali B., a Sudanese man in his 30s based in Qatar, started blogging in 2007 to explore issues about his gay identity without facing the obstacles he encounters in daily life. But he didn’t find much comradery online. His very first post was answered with criticism and threats.

The fact that you are a gay Sudanese and proudly posting about it in itself is just not natural,” said one comment.

In Sudan, no one would tell you if he or she is gay.”
H. K.The existence of LGBTs is common knowledge in Sudan, but it is still a taboo subject. Most LGBT individuals live a closeted existence; coming out to one’s friends and family is a rare occurrence.

In Sudan, no one would tell you if he or she is gay, even though I never really thought about this,” said H. K., a college student in his senior year at Sudan University. But if I did find out about someone’s sexual orientation and this person was a friend, I would remain friends with this person because their orientation is their own business.”

In his blog, Ali B. shares his experience navigating a difficult path in Sudanese society to advise youth in similar situations.

Freedom Sudan lists education as an key objective. In addition to raising awareness in Sudanese society about the difficulties faced by LGBT individuals, the group wants to provide counseling sessions for LGBT individuals and their families.

In June, Freedom Sudan joined the International Lesbian and Gay Association (ILGA), a global network of LGBT organisations. It also collaborates with LSVD, the largest gay rights group in Germany.

Many LGBTs in Sudan are still afraid to join us,” he said. We hope to be able to reach them all some day.”

For more information: http://freedomsudan.webs.com/ and http://bedayaa.webs.com/From devils” to freedom fighters,” the members of Freedom Sudan have been called many things. But when they come home from universities or day jobs, they log onto the website to continue their struggle for a cause that affects their lives every day. The website is one of the few places they can be themselves.

We're here to let you know that there is absolutely nothing wrong with you,” wrote one Sudanese man in a blog post. You are not bad or evil. You have a different sexual orientation or gender identity--that is all.”

Sudanese women become their own bosses despite downturn
All articles are available for republishing. Please notify us via email when you syndicate our content. Thank you!
© 2020 MiCT, all rights reserved.