Mahasin Ali and her sister run an outdoor cafe in the Sudanese city of Omdurman in Khartoum state. It is a makeshift affair, a few plastic chairs circling Ali who sits on a low stool, preparing tea, coffee and pastries for her customers.

Locally, the two sisters are called tea ladies” and they have become a familiar sight on local streets over the last few years, catering for businessmen to young people to students.

Ali mixes tea with spices such as ginger and cinnamon and sells it for two pounds (US$0.40), a better deal than in other cafes where plain tea is sold for at least eight pounds (US$1.60). 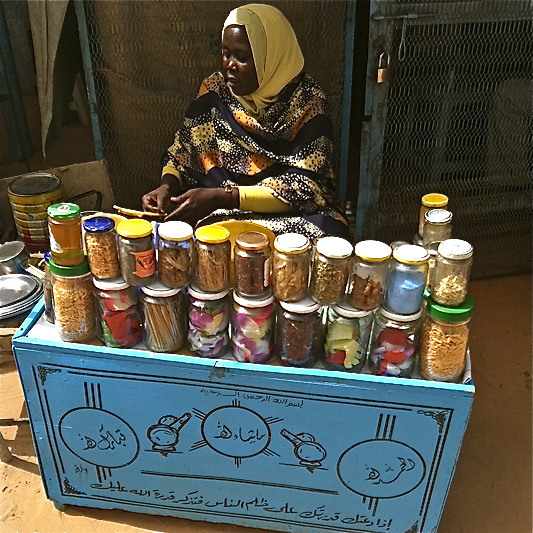 A woman selling tea in El-Fasher market, Darfur, March 17.
© The Niles | Reem Abbas ShawkatBefore opening for business in the morning, Ali works as a cleaner at the University of Khartoum where she makes roughly US$100 after benefits and the recent increase. Her husband died years ago, leaving her with four daughters.

My salary isn’t enough, I give the money I make by selling tea and coffee to my daughters who go to university and use it for our daily expenses,” says Mahasin who works from 7 a.m. to 10 p.m. every day.

And Ali’s story is not an unusual one: There are no exact figures available, but the streets of Khartoum buzz with new businesses run by women, from cupcake stores to nail spas to women selling home-made ice-cream on street corners.

Sudanese women have come a long way since the rise of the women’s movement in the 40s and 50s. In 1964, the year Sudan revolted against a military dictatorship, women gained the right to vote and, a few years later, the right to equal pay.

The trend gained momentum in recent decades. In the 1990s, official statistics show women’s employment rose although the economy was not creating new jobs. But the women’s journey into the workplace has been far from easy. As late as 2000, the Sudan’s constitutional court ruled against a decree banning women from working in public spaces such as gas stations and restaurants.

This move sent a message about women’s central role in the Sudanese economy and the 2000s witnessed an increase in women’s profile in both the formal and informal workforce.

However, in the traditional workforce, women remain hindered by low wages and the struggle to find a job reflecting their interests and qualifications. A population council research paper estimates that Sudanese women represent 47 percent of the workforce in the public sector, but they mostly work in lower and middle-level managerial jobs.

Wedding Planners ™ SUDANInstead, many women are trying out their chances in the informal economy, which offers them flexible working hours as well as an opportunity to try out their creative new business ideas. Often their customers are women, especially educated or working women.

For example, Rimaz Hashim, a civil engineering student at Sudan University, began an online wedding planning business with a friend in 2009. I started my business on Facebook because its free and I can reach many people,” said Hashim whose Facebook page, Wedding Planners Sudan, attracted thousands of members and is full of pictures from weddings she organised.

Middle-class men, in particular, have suffered during Sudan’s economic decline which began before South Sudan’s referendum in early 2011.

I have no responsibilities as I am unmarried, I have a car , a good job , but I still consider leaving the country, it is a dead-end here,” says a young telecommunications professional who did not want to be identified.

Fatima Salah, who owns a furniture and art gallery in Khartoum, notes this demographic shift. There is a change in society: middle-class people, especially men, cannot move forward in their career, they are not making good money, so they leave Sudan.” 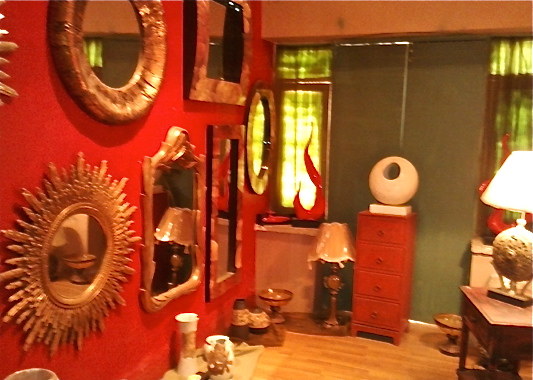 Inside Fatima Salah’s gallery and furniture shop, September 30.
© The Niles | Reem Abbas SawkatI have always wanted to do interior design. In Sudan, people watch television and see how homes abroad look. They want this quality,” explains Salah who owns a gallery where she sells furniture, home accessories and also showcases the work of famous and up-and-coming Sudanese artists.

Salah said women do not face more prejudices in work than men -- but she has the universal issue of juggling her work with caring for her little boy. However, she added that Sudanese society frowns upon independent women, who men view as too intimidating to marry.

This prevalent opinion weighs on career-minded women. This view sometimes restricts women from going forward with their careers. For example, when Shaima Essam Al-Deen, a 25 year-old event organiser who is interested in getting an MBA and starting her own business, told her close friend she wanted to complete a master’s programme, her friend retorted that master’s degrees are for spinsters”.

Amel Habbani, a women’s rights activist and journalist told The Niles that when women progress academically, financially and professionally, it becomes hard to find a compatible marriage.

Many successful women get proposals from men who are not at the same level and are instead looking to improve their personal situation,” Habbani notes.

In South Khartoum, Yasmeen Mohamed opened Flawless Spa, a newly established beauty centre in Khartoum. In an interview with the Niles, Yasmeen explains that I target all kinds of women especially working women who want the same spa experience they would get outside Sudan”.

Mohamed added that she is encouraging women to start their own businesses by advising young women who come to her asking her to train them. She has also trained a friend who started her own beauty business in another Sudanese city.

The economic problems are affecting my business, but I’m giving a lot of discounts to continue attracting customers,” says Mohamed.