Initially scheduled for last October, the conference was postponed when protestors stormed the German embassy in Khartoum following a Youtube film by an American film that mocked Islam.

At the official opening German Foreign Minister Guido Westerwelle outlined German hopes that the conference would help Sudan and South Sudan along the path toward peace”.

The conference would help Sudan and South Sudan along the path toward peace”.
Guido WesterwelleSpeaking to some 300 attendees he said that economic development was key to obtaining stability in the volatile region, adding that poverty feeds extremism and hate.

Sudanese and international human rights activists, however, voiced opposition to the meeting.

Ahead of the gathering activists railed against Germany for hosting the event. Act for Sudan, a coalition of Sudanese and US activists and organisations protested the conference, circulating a letter signed by 64 international organisations as well as human rights advocates including the US Department of State 2012 Recipient of the International Women of Courage Award, Hawa Abdallah Salih.

The letter called on Foreign Minister Westerwelle to cancel this conference that places Germany squarely in the role of generating financial support for the genocidal Sudanese regime”.

Germany is among the few Western countries with good links to Sudan. The nation, which operates under a US trade embargo, is trying to attract more investment to help its ailing economy, which lost its oil income to South Sudan when its neighbour became a separate nation in 2011.
The Berlin conference was attended by South Sudanese representatives, who are also hopeful for business with Western firms to halt the country’s economic downward spiral.

According to the letter, the signatories are concerned about the human rights violations in South Kordofan, Blue Nile, Darfur and the East and they fear the conference will help to fund more atrocities against civilians”.

During his speech, Westerwelle stressed that Germany would push for peace in the conflictive regions including Darfur, the Nuba Mountains and Jonglei.

Speaking to the Niles, Susan Morgan from Act for Sudan argued that financial support to the Sudanese regime should not occur until attacks on civilians stop and there is humanitarian access across Sudan. 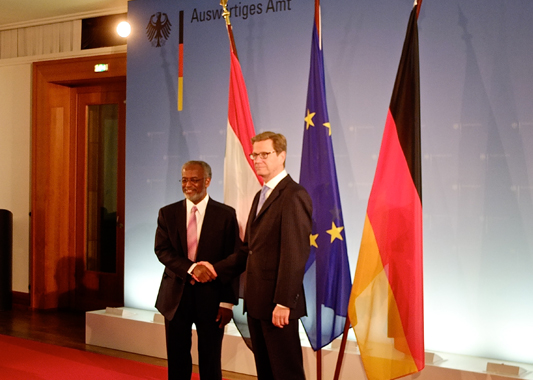 Germany’s Foreign Minister Guido Westerwelle and his Sudanese counterpart Ali Karti, minutes before the official opening of the trilateral economic conference between Germany, Sudan and South Sudan on January 29.
© The Niles | Nik LehnertThere should be a clear demonstration of progress on all remaining issues, including an inclusive constitutional review process followed by free and fair elections,” she said.

The letter was signed by activists from Iraq, Uganda, Austria, Greece, the UK, Italy, the US, Niger as well as Sudanese activists.

In March 2012, a Sudan investment conference to be held in Turkey was cancelled as the US and other powerful countries signalled that they would not attend due to Sudan’s ongoing conflicts.

Girifna, a pro-democracy Sudanese group wrote an open letter to Germany on its website asking the host to put people before profit”.

The letter states that the Sudanese government is implicated in conflicts, an attack on civil society organisations as well as a crackdown on independent media outlets and peaceful protest movements.

Money does not solve Sudan's political problems, it helps supports conflicts and displacement,” said Shutta in an email interview.

Business however is struggling in Sudan, which recorded a budget deficit of 10 billion Sudanese pounds this year. The country’s economy witnessed a steep economic slide since South Sudan’s independence in July 2011 when Sudan lost 75 percent of its oil revenues.

Sudan hopes to attract investment from Germany and other European countries to ease its debt mountain which stands at $46 billion, making it difficult to borrow money.

The Sudan People’s Liberation Movement- North Sudan Faction (SPLM-N) was the first group to call for the cancellation of the conference. Its Secretary-General, Yasir Arman, asked Germany to assume its responsibility in putting an end to genocide, protecting civilians and ending the war,” in a statement issued last week.