It's election season in South Kordofan, and the campaign has created tension amid fears that the results might lead to even more perplexing conditions in the state. Neither of the gubernatorial candidates have managed to alleviate a prevailing atmosphere of distrust. It's clear that Abdul Aziz al-Hilu of the Sudan People's Liberation Movement (SPLM) and Ahmed Haroun of the ruling National Congress Party (NCP), who is wanted by the International Criminal Court for war crimes and crimes against humanity in Darfur, are not acting alone on the political stage; many players on both sides are influencing the drama. There has been no lack of verbal altercations or accusations of fraud, which are aggravated by hate media that may not rest until the curtain falls on everyone's heads. 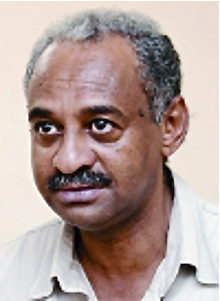 Faisal Mohamed SalehSouth Kordofan and Blue Nile States are witness to similar conditions: the two main parties are sharply polarised, with no strong third party to act as a buffer.

We need to recognise, first, that the inflamed situation in these regions is not a mere shadow of the electoral strife between the NCP and the SPLM, though this conflict has surely made it worse. The problems of Blue Nile and the Nuba Mountains did not start with the emergence of the SPLM.

The NCP should not assume the South's independence would allow a monopoly of influence without contest. As long as the people of the region embrace a cause, they will create a way to achieve their goals. It would be more effective and much safer for the NCP to acknowledge the political weight of the SPLM. The party would also benefit if it opened the door to a peaceful political process with the SPLM in the country.

The SPLM's supporters in the two regions should be mindful that the South voted for separation; it will soon become a neighbouring state. It is not in the interest of Blue Nile or Southern Kordofan to fight for the interests of the SPLM or Southern Sudan. With the South on the verge of independence, it's out of the picture. Since the Blue Nile and Southern Kordofan remain part of Sudan, the SPLM is obliged to rethink its strategic agenda in the two regions.

The other political forces present must be active in addressing the needs of the Sudanese people. This would allow them to play a constructive role instead of being caught in the political rancor between the main parties. The emergence of a third political entity could decrease the prevailing polarisation and help pave the way toward rational, objective solutions to the problems of the two regions.

The citizens of these two regions deserve a hopeful future and deliverance of their leaders' promises.