Space in short supply as displaced people cram into Nimule

Martha Ajah (left) and some of the displaced children she shelters in Nimule, Feb. 6.

The crisis has really put us in bad shape and helpless.”
Martha AjahIn South Sudan’s southern town Nimule, internally displaced people who have fled violence, squeeze into churches, schools and onto the verandas of shops, hoping for shelter.

Some IDPs have moved into their relative’s homesteads, increasing risk of diseases like cholera which spreads in unhygienic conditions.

Since fighting started on December 15, spreading fast across a number of states, more than one million South Sudanese have fled war, seeking refuge in camps, with relatives, or beyond the country’s borders.

Martha Ajah (second from left) shelters around 40 people on her compound in Nimule, February 6.
© The Niles | A. K.Sixty-year-old Martha Ajah’s two thatched huts have become home for over forty people. She is supporting relatives, mainly women and children, who fled from the fighting, arriving in Nimule at the Ugandan border.

The crisis has really put us in bad shape and helpless,” she said. I have now accommodated about 13 women with their children forced out of Jonglei by the crisis in this small house of mine.”

Ajah has lived in Nimule for several years since she lost her husband during the 21-year civil war that led to independence.

She said some women fled without their belongings and have since decided to go back to Juba in search of food and other basics, leaving with her with their children. She has around a dozen children aged between 1 and 15 years living in her small compound.

Nimule is 192 km away from the newest nation’s capital Juba. It has about 35,621 internally displaced people, mostly from Bor and Juba. The sudden spike in new arrivals has put pressure on shelter, food and health services. 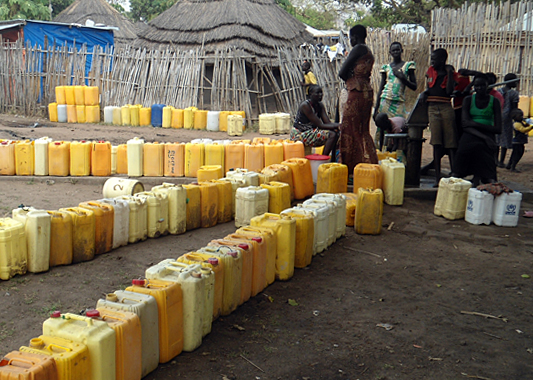 Basic services are scarce in Nimule, following the influx of IDPs.
© The Niles | A. K.Drabuga Henry Simon, a headmaster of St. Patrick Primary School in Nimule said about 1,000 people have moved onto his school premises, crammed into classrooms.

Health is suffering, he said, explaining that people are defecating in the area and littering the school with waste, causing a hygiene risk due to a lack of facilities.

At the same time, he says he has more students wanting to study, adding that he was only able to enrol 110 pupils.