South Sudan is no longer just a mass of dusty, sleepy towns. Two years after independence developers have snapped up vital agricultural land around towns. Advocates of this process say the fresh funds will invigorate the nation’s infrastructure and economy. Its critics, however, warn of extreme food shortages as the crop of new buildings restricts farmland for the expanding population.

The lack of agricultural land means malnourishment, higher food costs and a greater risk of children dropping out of school (because parents no longer earn from their crops and cannot pay school fees). The United Nations warned in March 2013 that more than four million people face food insecurity in South Sudan, meaning four out of every ten citizens lack enough to eat.

The Oakland Institute provides detail on how locals are ignored in favour of officials earning a fast buck. In 2008 the United Arab Emirate based tourism and conservation investment company Al Ain Wildlife entered a 30 years lease agreement with the then Southern Sudanese Ministry of Wildlife, reportedly under instructions from the president’s office. The agreement covered 16,800 square kilometres of this wilderness of land in Boma national park, which Al Ain agreed to develop and manage for tourism and conservation. 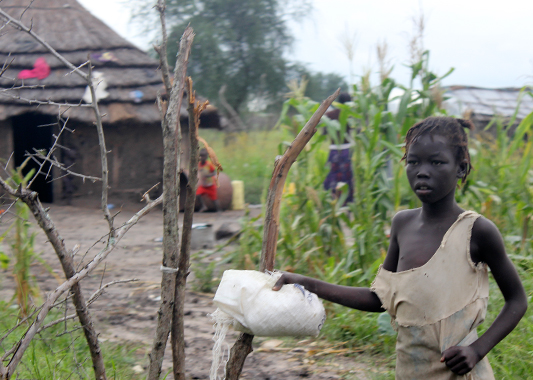 A girl in front of the family’s homestead, Jonglei State, September 14, 2011.
© The Niles | Waakhe Simon WuduRevenues from the industry were to be divided with 70 percent for Al Ain Wildlife and 30 percent for the then Southern Sudanese government. About 15,000 people from Anuak, Murle, Jie and Kachipo were affected by the project and relocated to a site which was four hours away by car.

Locals were not consulted on this development plan, nor did the project respect its promises for employment, educational facilities, health centres, airstrips, boreholes, housing, roads and a model village. This example is not a one-off. And, worryingly, land is being sold off fast in a country which is already reliant on expensive food imports.

Less land for agriculture will translate into more dependency on other nations. A report from the Ministry of Trade, seen by The Niles, indicates that food imports especially from East Africa stood at 83 percent in 2013 so far.

Meanwhile, the fast pace of development contradicts official and non-governmental organisations’ efforts to improve farming. Muhammad Nurul Islam, agriculture manager at the Bangladeshi NGO BRAC told The Niles that fears that his organisation’s efforts to help local farmers may stumble due to limited land availability. Although our projects are going well with the farmers at the moment, if not enough agricultural land is allocated, our projects may fail,” he said, adding that non-agricultural land development could jeopardise BRAC’s investment of 450,000 Euros in the Central Equatorian town of Yei and the Western Equatorian capital Yambio to support 24,000 farmers over the next three years.

Meanwhile, the Ministry of Agriculture is trying to increase loans for farmers – although securing access to land is arguably more important. Deputy Director for planning, Michaya Gamunde hopes that farmers can access agricultural loans. We are waiting for some funds, and once available, we shall channel them through the agricultural bank so that farmers shall access loans,” Gamunde explained.

Much of South Sudan’s agricultural land is covered with land mines and swamps and the government lacks funds to clear it. Tom Kidhogwa, a Ugandan economic analyst, said that the land should rather be leased out for development in the meantime, arguing that it is a more lucrative option than leaving the land empty.

But others advocate a mixture of support for farmers and investors. Isaac Meta, a student in rural development at Juba University, aims to run a farm in his home village Morobo (Central Equatorial State). Once I am out of school, I will head back to Morobo, my fertile village, and make the best out of it,” he said. But we have to share the land with investors because not only agriculture is needed in South Sudan. Other things are important, too.”