A player of the EU team poses with the trophy while shaking hands with one of the coaches’ players, May 11.

Ambassador Sven Kuehn von Burgsdorff, Head of the EU Delegation to South Sudan, received the trophy on behalf of his team, comprised of nationals from Germany, France, Netherlands and Britain. 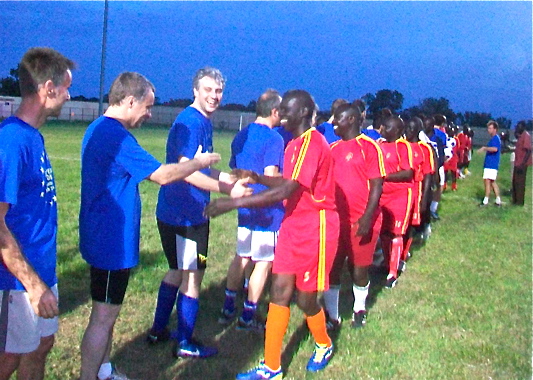 South Sudan football coaches (in red) shake hands with the EU Delegation’s team before kick off, May 11.
© The Niles | Akim MugisaEdward Fula, who coaches the local Kator Football club, scored for his team in the 30th minute of the first half after his shot went past the EU’s goal keeper in the top-right corner of the net.

The EU team was unable to capitalise on its scoring chances. Kuehn von Burgsdorff’s had a great chance in the 88th minute, but the well targeted shot was intercepted by the coaches’ goal keeper Emmanuel Baya. A last minute chance, a free kick after a foul by a player from the coaches, went far off target.

Speaking to the media after the match, Kuehn von Burgsdorff said his team looks forward to more similar events in future. A re-play between the EU Delegation’s team and the South Sudanese football coaches is scheduled for July 9, when South Sudan celebrates its second independence anniversary.

A coach that spoke to The Niles after the match described Saturday’s football match as a good idea”. In football, we create friendship and now we have established friendship with them [the EU Delegation’s team]. I believe they have the ability to help development of football in South Sudan.” 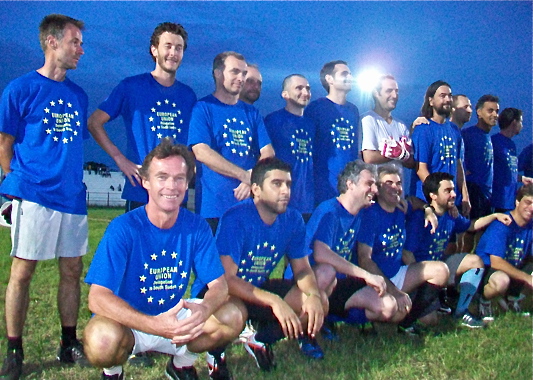 The friendly was part of the activities to observe the Europe Day 2013, celebrated on Thursday, May 9, and organised by the EU Delegation, in cooperation with the National Football Association of South Sudan and with the support of FIFA.

The sporting event highlighted what has been celebrated on Europe Day: diversity, respect and tolerance make the strength of any given team, community or nation.