German Ambassador-designate to S. Sudan David Schwake, Beate Mueller-Grunewald of the German Embassy and the award recipients in Juba, August 2.

Tuition, research, travel, full board accommodation, health and other living expenses are covered for the one-year courses. Gift Sarafadim Simon will attend a Masters of Social Science in Wildlife Management at the Karatina University, Kenya while Maurice Tiberio Marianga Datukowo will attend a law programme at the Tanzanian-German Centre for Eastern Africa Legal Studies (TGCL) in Tanzania. 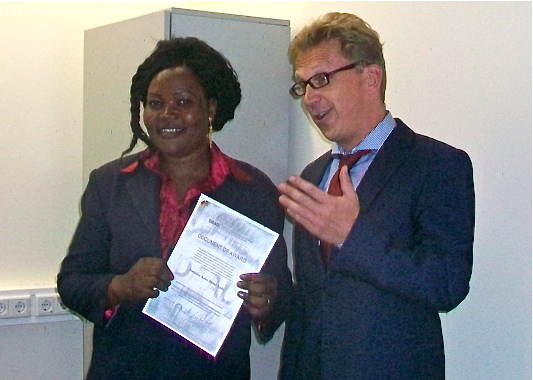 Madalina Kaku Daniel Lado after receiving her award from the German Ambassador-designate to S. Sudan David Schwake, August 2.
© The Niles | Akim MugisaThere were two female beneficiaries: Grace Ayite Banja Abe will follow a Masters of Science in Food and Nutrition and Madalina Kaku Daniel Lado will be able to do a Masters in Social Science and Statistics at Jomo Kenyatta University Nairobi, Kenya.

The German Ambassador-designate David Schwake presented the scholarship awards to the visibly excited students on August 2, at the German Embassy in Juba.

Ambassador Schwake said the students were the first fellows selected after the July 2011 independence of South Sudan, adding they were selected from among some 50 applicants. If we get qualified applications we will offer more,” he pledged.

The programme aims to produce future staff for Juba University and other universities in South Sudan. A statement from the embassy indicated that two more scholarship opportunities were still being processed.

Grace Ayite Banja Abe, who is heading for a food and nutrition course at Jomo Kenyatta University in Nairobi, said she would get qualified to fight the import of substandard food products into South Sudan. We should try our best to put effort into education. It is the key,” Grace advised young girls in South Sudan.

Another recipient of the scholarship, Madalina Kaku said she was sure of returning from her studies to benefit the country. In our college of Social Statistics we lack lecturers.” 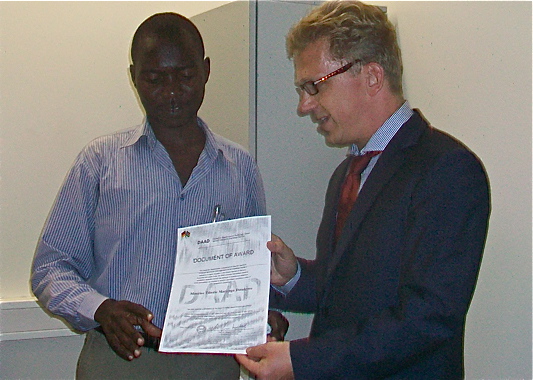 Maurice Tiberio Marianga Datukowo (left) is heading for a law programme at the Tanzanian-German Centre for Eastern Africa Legal Studies, August 2.
© The Niles | Akim MugisaThe Director for External Relations at the University of Juba, Nelson Moro, said he regretted how the country’s long civil war had led to a shortage of staff and research. We are grateful for the opportunity,” he said.

He extended his gratitude to the government of Germany and called the move a good start”, signalling his hope more students would be helped in the future.

The German Academic Exchange Service, DAAD, a publicly funded, self-governing organisation of institutions of higher education in Germany, promotes international academic exchange as well as educational co-operation within developing countries through a variety of funding and scholarship programmes.

Germany has been a strong development partner of South Sudan in the period prior and after the 2005 Comprehensive Peace Agreement offering support in health, water and sanitation, education, rule of law and other key sectors.