When South Sudan became independent in 2011, it adopted English as its official language, even though Arabic and regional languages dominate private banter.

The 2011 transitional constitution dubbed English as the official working language” but added that all indigenous languages of South Sudan are national languages and shall be respected, developed and promoted.” With an estimated 64 tribes speaking different languages, the question remains how these will be promoted and developed.

All indigenous languages of South Sudan are national languages and shall be respected, developed and promoted.”
2011 Transitional ConstitutionMeanwhile, in practice, English is still a long way from serving as the working official language, not least because government members typically studied in Arabic in Khartoum.

Further complicating the linguistic mix, there is another dominate language called Juba Arabic,” a form of simplified Arabic slang often used for social interaction. However, usage of this language varies regionally. In the eight counties of Lakes State, for example, not everyone can speak Juba Arabic whereas in Greater Equatoria almost everyone can speak and understand the tongue.

The fact that South Sudan lacks one unifying language forms a big challenge for the nation’s fledgling media. Media practitioners are confused about which of the three languages that should be used to reach the rural population, a problem which is compounded by the country’s rural illiteracy rate, one of the highest in the world: an estimated one in four people able to read. 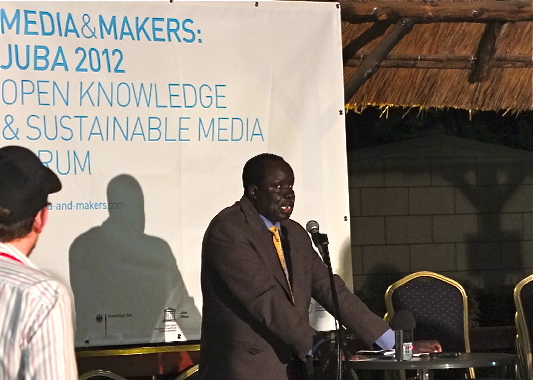 Atem Yak Atem, Deputy Minister of Information and Broadcasting during the opening reception of the Media & Makers conference in Juba, December 10.
© The Niles | Nik LehnertRadio is the best medium we can use to reach the rural population who do not know how to read and write,” said the Deputy Minister of Information and Broadcasting Atem Yak Atem during the opening reception of the MICT Media & Makers conference held in Juba on December 10, 2012. We are working hard as a government to make sure that people listen to their local language in a local radio stations.”

He said that many rural populations cannot read newspapers due to illiteracy and poverty and a lack of electricity prevents them from owning television sets. He cited the example of Lakes State where there is a local radio station FM 98 in Rumbek town that uses Dinka language to reach the largest population in Lakes State that speak that language, he suggested that it should be done by other states in order to reach out to local populations.

This language issue is also reflected in the nation’s universities. Those who studied Arabic in Khartoum and join the universities in South Sudan after the independence are reluctant to switch languages.

We sometimes fail examinations because we cannot interpret questions well,” said Martin Deng, a student of Juba University who is studying medicine. Deng studied in Arabic in Khartoum and he joined Juba University after the  referendum.

Deng is trying to improve his English by attending extra language courses: We shall catch up if we develop zeal in English because there is no way out since it is an official language,” he added.

We sometimes fail examinations because we cannot interpret questions well.”
Martin DengHowever, not all students welcomed having a new language at university. According to news reports published on Miraya FM, students protested against being lectured in the English, arguing that they couldn’t understand. Ten days later, there was another protest staged by students of the University of Bhar el-Ghazal in Wau.

A story on Gurtong website in 2012 said English and Arabic students clashed over the two languages, with each group claiming that their language should be used for lectures. Students on the campus generally use Arabic for social interaction and even in conducting their political rallies. English, meanwhile, is confined to the lecture rooms.

Natanina Baya, Head of English Department at Juba University told The Niles that they are trying as hard as possible to make sure that students who studied in Arabic can use the system. We simplified the language in order for Arabic students to understand examination questions, and we also help them understand in lectures by switching the two languages,” said Baya. 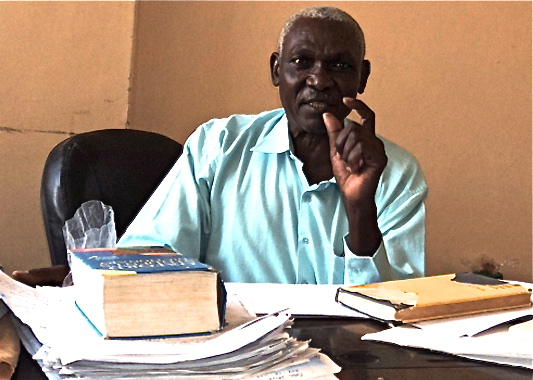 Natania Baya, Head of English Department at Juba University, January 24.
© The Niles | Abraham Daljang MakerHe urged science students to use English. Science is taught in English all over the world even in Arabic speaking countries,” Baya said. He added that the university runs a programme called English for Specific Purpose; (ESP) this programme is designed to help Arabic students learn basic terms related to the profession they are pursuing.

As a nation South Sudan still has a long way to go in the process of developing one language for official use, largely because of its tribal diversity and the issue of integrating returnees from the north. The media is also struggling to find its feet and regional services are best suited to the linguistically diverse rural population.