Buses struggle to profit from Kampala to Juba route

A LOL Express bus parked in the company’s yard in Kampala, August 22.

Fewer passengers and higher fuel costs are piling the pressure onto bus companies running services between Uganda and South Sudan.

Competition is fierce among the large number of buses driving from Kampala to Juba, meaning companies are slashing prices to try and lure more passengers.

Bus companies are allegedly charging less than half the usual 70,000 to 80,000 Uganda Shillings (between US$ 28 and $32). Meanwhile, buses making the long trip are often in bad condition, meaning they break down en route, inconveniencing passengers and pushing up running costs for bus companies. 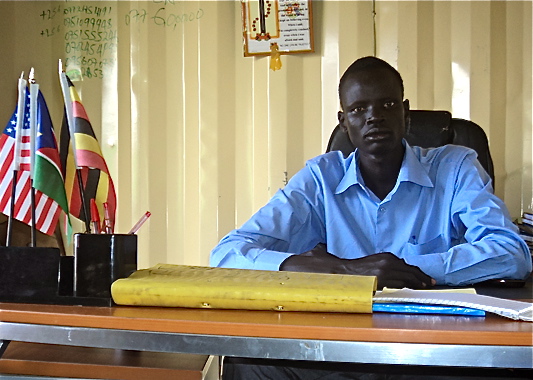 LOL Express Acting Manager, Akol Adup in his Kampala office, August 22.
© The Niles | Abraham Daljang MakerAkol Adup, acting manager of LOL Express said that the biggest problem faced is the expense of fuel. The cost of a litre is now 3,200 UGX, up from 2,000 UGX at the start of the year. Given that a bus needs 300 litres to travel from Kampala to Juba, companies spend 960,000 UGX to fuel the journey.

We are operating at loss, Adup says. Expenses are more than our income. Worse of all, when the bus breaks down we have to buy expensive spare parts.”

Their journey is hampered by the roads’ bad condition. According to Adup, the surface is worst between Nimule and Gulu, adding hours to the journey time. During the dry season the road is too dusty and it becomes impassable when it rains heavily.

December is the best season for bus companies operating the route. Then most South Sudanese students studying in Uganda and others working in Uganda travel home for the festive season. During that month, fares jump to between 100,000 and 150,000 UGX, boosting profits for the companies.

Buses with foreign number plates are the most expensive to run. LOL Express, which has Kenyan number plates, is routinely charged 135,000 UGX at the Uganda border and 100 South Sudanese Pounds (SSP) at the border of South Sudan.

Ugandans make up almost three quarters of all foreigners living in South Sudan, followed by Kenyans. In a bus which carries 66 passengers up to a third comprises South Sudanese and the rest are Ugandans or Kenyans who are investing in both large scale to small scale businesses, a trend which has boomed since South Sudanese independence in 2011.