Quest for money and food forces children onto streets

Deng Kiir and his friend produce and sell dusters from old sacks, November 2.

The search for money and food is pushing children on to the street, according to a report by the Child Protection Working Group in Warrap State, which interviewed children living and working on the streets.

The survey, completed by the Ministry of Social Development backed forum, targeted three main towns, Kuajok, Tonj South and Gogrial and evaluated a total of 306 street children, a group which contained one single girl.

A third of the sample group said they were on the streets to work for an income and 87 said they lacked food at home. 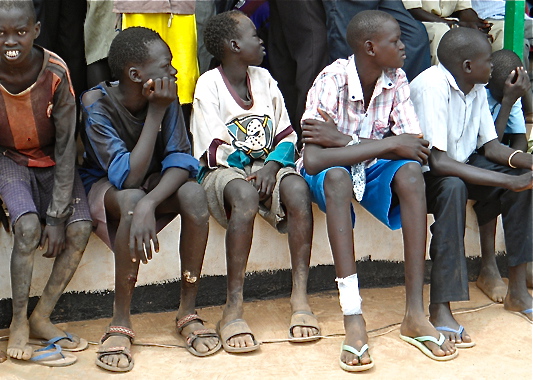 Street children watching a football match at Kuajok Freedom Square, November 3.
© The Niles | Aping KuluelI was living with my mother in the village because my father died. When I decided to visit my sister, things became tough in her home; there is no food and no even support for education. So I resort to selling plastic bottles in the market to earn a living,” said Thou, a 12-year-old boy from Mayomabun in Twic County who moved to the streets a year ago.

Deng Kiir, another of the street children included in the sample group, hails from Wunyeek in Akoon. He makes his living out of selling thrown away sacks. He cannot remember his age because his parents died when he was at infancy.

Both my mum and dad died and aunt picked me up. Staying in that village with aunt is not good because getting regular meals is very hard,” Deng said, adding that he was taken to the village three times and escaped because in town here he can get at least two meals a day.

We make some money from shopkeepers through these things we made out of old sacks. The shop owners buy this for 2 SSP for beating away dust.”

Staying in that village with aunt is not good because getting regular meals is very hard.”
Deng KiirKiir moved away with other four children. He says they share whatever food they get.

Tong is seven years old and Mary is 10. Both come from Gogrial West and prefer life on the street where at least they can earn money. I like life on the street because I get income but sometimes some other street children rob me,” Tong said.

The State Minister of Social Development Victoria Tiito told The Niles that polygamous marriage is one of the main causes that throw children to the street. She said that men married to many wives neglect their wives and children.

Recently there has been growing concern about the increasing number of street children across South Sudan. 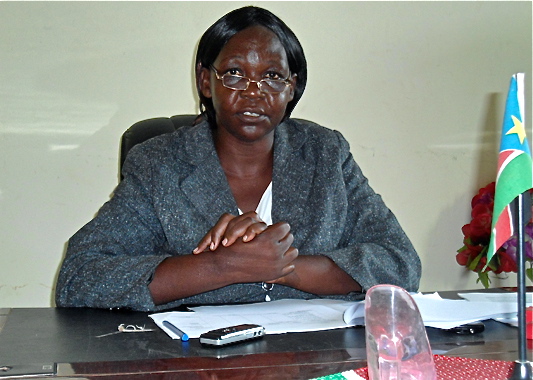 Minister of Social Development, Victoria Tiito, November 7.
© The Niles | Aping KuluelAlthough the research focused on small group of street children, the team who conducted the assessment said there were many more children on the street.

In Kuajok, the capital of Warrap State for instance, dozens work selling plastic bottles, working in exchange for food or polishing shoes.

During the night, the kids lie squashed together on Freedom Square, by the police station and in the verandas of the shops by the market.

During the day, young children beg for food and others forage for food at rubbish dumps.

The health of these children is a key problem. Poor hygiene and sanitation, exposes them to malaria, scabies and skin rashes.

The report noted that about 81 percent of the children in the sample group have no access to sanitation facilities nor medical services.

Thou is among this majority. He said he couldn’t find medical treatment after a restaurant owner slashed his right hand with a knife during an argument.