Aping Kuluel
Rearing sheep is rare in South Sudan and practically unheard of in a Dinka-dominated region such as Kuajok. But Matow Deng, a 39-year-old Juba University graduate, turned his hand to sheep farming and hasn’t looked back.
Archive
Share this article:
Facebook
Twitter
Google+
Visit us:
Facebook
Follow us:
Twitter
Permalink:

Cows are a potent status symbol in South Sudan, conveying power, wealth and serving as the main currency to buy a bride. Sheep on the other hand are rare -- but some have identified them as a new source of wealth.

With no job and an extensive family to support, Matow Deng asked himself why sheep farming was not more popular.

What prompted me to invest in sheep was to generate income. I know that sheep are easy to manage and multiply fast,” said Deng, who was transferred to Kuajok, in Warrap State, by his employer. 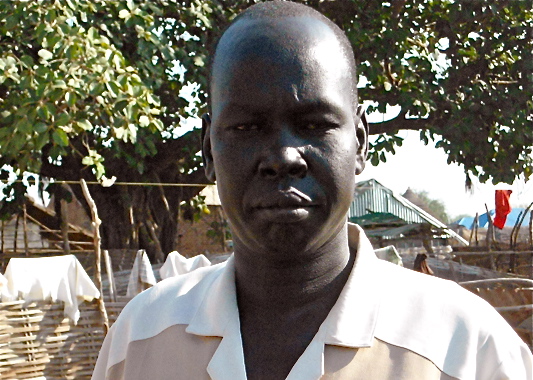 Working for the state headquarters, Deng earned just 900 SSP (about 250 US$), too little to feed an extensive family including two wives, children, his brother’s children and other relatives. For Deng the sheep farming business was a question of family survival.

He also wanted to show the local community the benefit of keeping domestic animals, challenging local norms. I know our people have many cows, goats, sheep and chickens but they keep them for prestige,” he said.

Mutton is in high demand, he said, adding that state government and non-governmental organisations sometimes buy 20 lambs at once.

In 2006, he started building up his business steadily. He saved 200 SSP a month and invested his funds in sheep, which cost 50 pounds each. He split his house into two, half each for humans and sheep.

Having studied animal livestock he ensured he had access medicine and vaccinates for his growing flock.

Three years later, he had 460 ewes. But his plans to buy poultry, cows and goats were halted by the government and community, which refused to sell him more land.

They don’t realise that there is no job that can earn as much as sheep rearing.”
Matow DengOther hurdles faced include thieves, dogs and cars: Around 20 percent of his flocks have been stolen, eaten or run over by these enemies.

Social stereotypes, meanwhile, are hard to overcome. Some people go gossiping about me, saying how can a graduate rear sheep instead of looking for a better job,” he said. They don’t realise that there is no job that can earn as much as sheep rearing.”

In the long term, Deng hopes to set up a farm including cows, sheep and poultry as well as some 2,000 sheep.

Getting land around Kuajok is now my main problem. If I manage, I will expand and employ people to work in the farm,” he explained, adding that his farm would serve as a research centre for scholars and provide manure for famers.

Through selling sheep, Deng said he is able to educate 14 children and sustain his family.

He urged low income earners to learn a lesson from his experience. For poor people, sheep is the ideal animal,” he said. It is cheap to manage and generates high returns.”

Lakes State wants to eradicate traditional head marking among boys
All articles are available for republishing. Please notify us via email when you syndicate our content. Thank you!
© 2020 MiCT, all rights reserved.