Fighting between the Sudan Armed Forces (SAF) and the Sudan People’s Liberation Army (SPLA) caused major population displacements and food prices keep rising. This has led to an acute food shortage in South Sudan’s Northern Bahr al-Ghazal State and worries many of the state’s citizens.

Due to the tensions between the two neighboring countries, traders transporting goods from Sudan to South Sudan are not allowed to carry on. The result is a shortage of food supplies, which rapidly increases the prices of the goods still available. A 50 kilogram bag of sorghum costs now SSP 200.00 ($ 50.00), a price most people cannot afford.

Deng Madut, a trader from Aweil, says that he and many other colleagues are willing to help his community, if the government reduces the tax levied on goods imported from Kenya and Uganda. We are ready to serve, but taxes are too much,” he points out.

The recent fighting however only added to an already dire situation. According to the World Food Programme (WFP), poor harvests, increased demand, rapidly rising prices and a large number of returnees have all contributed to the food shortages, with a shortfall in cereal production weighing heavily on already distressed communities.

Many citizens in Aweil East County say they have been affected already since last year, mainly due to insufficient rains and ask the government and aid agencies to do more. If there is no possibility to rescue our situation here, they better tell us to evacuate the area and start moving us to where we can survive,” Makuac says. 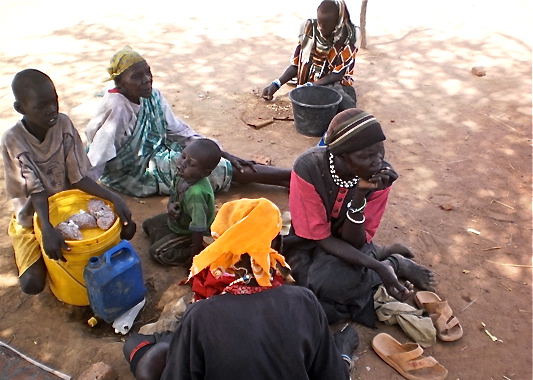 Women wait for food aid in Aweil East County (19.04.2012/Hou Akot Hou).WFP distributes food aid, such as sorghum, oil, lentils among others, but residents complain that the process of getting the rations is too complicated. We may die, if the food aid distribution is not done fairly,” Makuac urges.

Locals, particularly returnees, raise a series of complaints that they are not considered adequately in the food distribution. The UN and other aid agencies distributing food in Malualkon, Aweil East County, were not available to comment.