Speaking about the tax bill earlier this month, the State Assembly Chief Whip Daniel Akol Diing said the government planned to use the tax revenue for education, public health and infrastructure projects.

Many Aweil residents however doubt that their money will be put to good use. 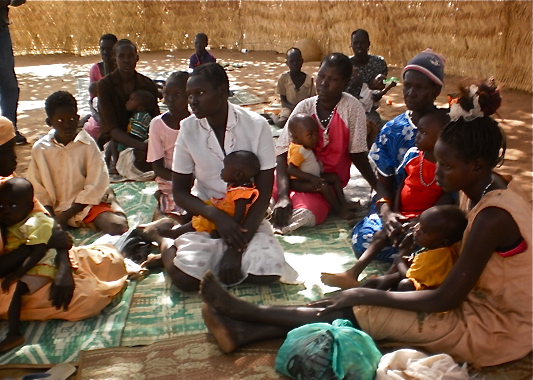 Waiting for health services in Aweil, May 5, 2012.
© The Niles | Hou Akot HouAchol Akec Diing, an Aweil west resident says she has already paid her 30 South Sudanese Pound tax contribution but now she has been asked to contribute one Malwa, which is four kilos of sorghum, a cereal crop, to the Sudan People’s Liberation Army (SPLA).

She only paid the taxes after being pressured by her chiefs, she said, adding that there has been no development in her village for years. She fears that the state will waste the funds that local populations can ill-afford to contribute.

We pay money to our chiefs and this is meant for household taxes and later on when we face hunger, they just call us for food distribution and don’t help us,” she said.

We pay money to our chiefs and this is meant for household taxes and later on when we face hunger.”
Achol Akec DiingImproved schools and access to clean drinking water are an urgent priority for the region, she said. For us women, we regularly attend meetings and listen as spectators. If this money is used wisely we want to be asked and then we would tell the officials what we think the money can be used for. Now we don’t have water or hand-pumps in most of the villages and we women suffer during dry season.”

Meanwhile, most of the chiefs argue that taxes are nothing new as they have existed since the British colonial period in Sudan which ended in 1956.

Achen Achen Yor, an executive chief in Aweil, says austerity measures have hurt the local administration. He hopes that the new taxes will create jobs and provide income for many of the chiefs who are currently not being paid.

But it’s not the work of the residents to say how the money should be spent.”
Achen Achen YorNow we hope that some of our sub-chiefs who were demoted will be reinstated and get paid. That is why people have chiefs in the localities, but one can’t be a chief if he is not paid,” Achen said.

We want these taxes to be put into the public finances. But it’s not the work of the residents to say how the money should be spent. We want the our state leaders such as Governor Paul Malong to think of what to do with the money for his people’s benefit.”

Officials insist that the household tax is mandatory, arguing that residents could face legal penalties if they do not pay.

Children urge politicians to boost education
All articles are available for republishing. Please notify us via email when you syndicate our content. Thank you!
© 2020 MiCT, all rights reserved.