Commissioner Awet briefs the press about the bombardment on Tuesday (23.05.2012).

According to the commissioner the bombs detonated in a forest causing little damage and no casualties. Yet, it is a clear set-back to international efforts for peace talks, Awet says.

Read also: Mbeki confident that negotiations will restart soonAfrican Union mediator Thabo Mbeki met the presidents of both countries this week in an attempt to revive negotiations and according to Reuters, Sudan and South Sudan agreed yesterday to restart talks next week with the aim of ending hostilities and settling disputes.

The Sudan government is attacking people indiscriminately” though being asked to cease hostilities, but they are not heeding that”, Awet says.

Sudan neither confirmed nor denied the raid on Warguet and an independent verification is still outstanding.

Martin Nesirky, Spokesperson for the UN Secretary-General said in a ‘Noon Briefing’ that the Mission (UNMISS), as I understand it, is in the process of verifying these allegations, but I don’t have anything further at this point”.

In early April clashes between Sudan and South Sudan armies along the border killed scores of civilians and displaced hundreds of Northern Bahr el-Ghazal’s residents. 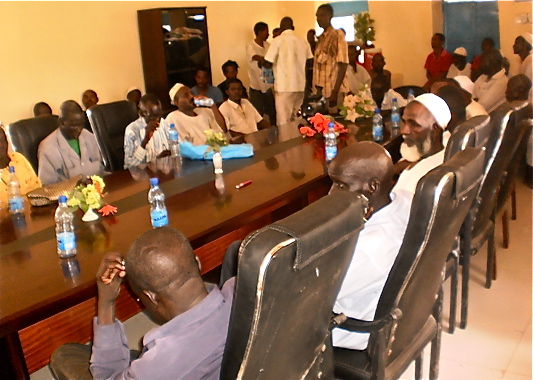 Foreign traders in Aweil East County attending a security forum with the Aweil East County Commissioner (23.05.2012/Hou Akot Hou).During a one day meeting with foreign traders Awet urged residents living along the border to dig trenches to take cover in case of any further attacks. Awet stressed that especially teachers should dig trenches to use as a hiding area whenever the planes fly over them”.

The meeting in Mabil with about 30 foreign traders from Sudan’s Darfur region and from Eritrea was held to assure the traders of the government’s willingness to provide protection for their businesses, as the state’s residents heavily rely on them.

Ahmed Ibrahim, one of the traders attending the meeting, says they are eager to continue working with the local authorities despite the trade embargo Khartoum imposed and the volatile security situation in view of the bombardments.

We are up to businesses here, since the 1980s we have been here and no matter what happens we will stay,” Ibrahim assured.

In Juba, the Government of South Sudan (GoSS) spokesman, Barnaba Marial Benjamin, says the attack on Northern Bhar el-Ghazal State is a slap in the face of the United Nations and the African Union.”

He also says his government views these acts of aggression” as a serious threat to both regional and international peace and security”.

It is hoped that the AU brokered peace talks between Sudan and South Sudan, resuming on May 29, will resolve several contentious post-independent issues, a dispute over oil revenues, border demarcation and the repatriation of Southerners living in Sudan.