A UN staff holds a placard demanding payment in dollars instead of South Sudanese Pounds in Juba, August 13, 2012.

Market sellers usually buy their produce in neighbouring countries, paying in US dollars, which are commanding high prices on the black market. That inflates the price-tags for market goers in Juba.

We are now selling our goods expensively because we buy (100) US dollars for as much as 490SSP on the black market. That was not the case before,” said Suzan Draru, who sells onions in Konyo-Konyo market.

We are selling goods expensively because we buy (100) USD for as much as 490SSP on the black market.
Suzan Draru

She said she didn’t know why there was a shortage of hard currency but pointed to rumours that the government is refusing to release dollars.

Joseph Atabua, who sells beans in the same market, blamed rising prices on the high exchange rate of dollars in the black market and bad road conditions within the country, especially along Juba-Yei road.

Joseph said he lost all his goods last week when a truck got stuck on the Juba-Yei. He had just a few goods left over, which had to be sold at inflated prices to cover his costs.

I am appealing to the government of South Sudan to work on the Juba-Yei road because it also earns revenue for the government especially from goods coming from the Democratic Republic of Congo (DRC),” he said.

A kilo of beans used to cost 10SSP but now goes for 12SSP, typical of price rises across the market.

Margret Namudu, who sells food items in Jebel market, said prices were further boosted by several taxes levied on traders by government officials. In Jebel market, retailers pay five different types of taxes to the different offices, she said, adding that she had not been given any clear explanation for the payments. All these expenses were passed on to buyers at the market. 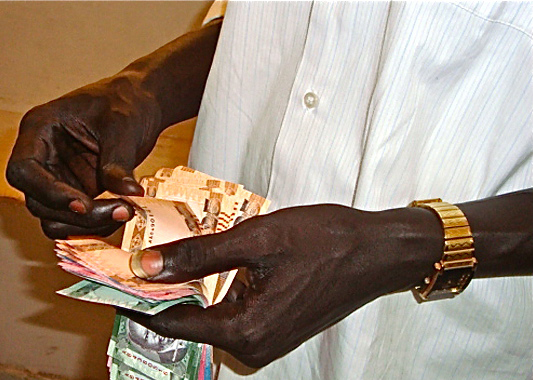 © The Niles | Pascal LaduAddressing the parliament on the issue of hard currency in the country, South Sudan’s Central Bank Governor Kornelio Koryom Manyiik announced that the official foreign exchange rate would increase from 2.96 South Sudanese pounds per US dollar to 4.50 to match the black market rate.

The announcement came after he and the finance minister and minister for economic planning were questioned by lawmakers in the parliament over the dual foreign exchange markets in South Sudan.

Earlier this month, the legislature ordered an investigation into the Central Bank over the black market for dollars.

Speaking to members of the National Legislative Assembly, Koryom said the Bank of South Sudan is very concerned about the existence of a dual foreign exchange market.

He said the supply of currency to commercial banks has been made difficult by the war, which has cut oil production in Unity and Upper Nile states from 350,000 barrels per day before the conflict to 160,000 barrels today.

Crime rates on the rise in Ugandan refugee settlements

Thousands travel to disputed Abyei enclave but lack food and water
All articles are available for republishing. Please notify us via email when you syndicate our content. Thank you!
© 2020 MiCT, all rights reserved.