People in Kajo Keji, displaced by the conflict along the border between South Sudan and Uganda, where the Kuku and Madi fight over disputed land, September 20.

News agencies reported on Friday that more than seven people were killed in the conflicts over territory in the borderlands around Uganda’s Moyo District.

Following the violence many fled, leaving the more vulnerable to fend for themselves.

Speaking to authorities, Scopas Taban Lokabang, the member of parliament representing Kajo-Keji County, said the border conflict was longstanding but had been ignored by officials.

The conflict started when Ugandan Census enumerators entered South Sudanese land in a place called Duany, they were arrested by South Sudan police,” he said, adding that they were warned not to return for their census exercise.

Also read:
Solution to border dispute between South Sudan and Uganda proves elusive
by Pascal Ladu | in Politics | 09.10.2011On their release, they went to arm themselves with pangas, knifes bows and arrows and spears to attack the Kuku community living in Moyo town,” Lokabang explained.

He further said that the fighting set 15 houses and two churches ablaze and one person was seriously injured.

The situation escalated when district and population census officials were abducted and tortured inside South Sudan.
Statement released by the Ugandan Internal Affairs State Minister

James Baba, the State Minister for Internal Affairs, confirmed that the stand-off between the Ugandan and South Sudan communities is based on a long standing dispute over the border.

However, he said the situation escalated when district and population census officials were abducted and tortured inside South Sudan. 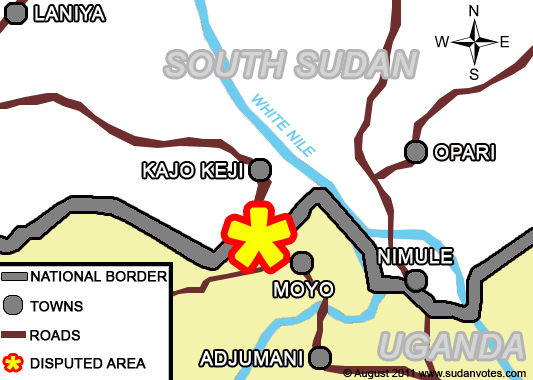 Map of disputed area.
© The NilesIn 2010, the Ugandan and South Sudanese presidents directed that the border dispute be amicably resolved. In 2013, a border demarcation committee was appointed headed by officials responsible for lands from both countries to sensitise the communities, do mapping and survey the common border. The committee hasn’t started its work yet.

According to NTV Uganda, Baba appealed to the communities in Moyo and Kajo Keji to remain calm until a lasting solution is found.

Meanwhile, Mary Kiden, a Member of Parliament from Kajo-Keji, pledged to form a committee to reunite lost children with their parents. Some of the parents are now in the capital Juba and fear being attacked again in Moyo. Others have resettled their families to Kajo-Keji town, she said.

Crime rates on the rise in Ugandan refugee settlements

Thousands travel to disputed Abyei enclave but lack food and water
All articles are available for republishing. Please notify us via email when you syndicate our content. Thank you!
© 2020 MiCT, all rights reserved.