South Sudan’s sudden announcement that it was going to ban alien” workers ignored the fact that foreign workers have been key to South Sudan’s fledgling economic development.

An excerpt of the original circular issued by the Ministry of Labour, Public Service and Human Resource Development on Monday, September 15.The government’s announcement on Monday, September 15, triggered shock and it soon backtracked on its plan to ban foreign workers in some key sectors including humanitarian aid last week — an important sector amid food shortages and pending humanitarian disaster.

The first official missive sparked confusion by referring to all aliens” working at NGOs, banks and other key institutions, while also listing a number of positions where foreign workers were to be replaced by nationals.

Following international concern and scornful headlines, a second press release was published, excluding people working for the United Nations and a list of other professions, including nurses and country directors and other high-level NGO workers.

But the debate overlooked the fact that foreign workers in the private sector are key to the country’s fledgling economy. 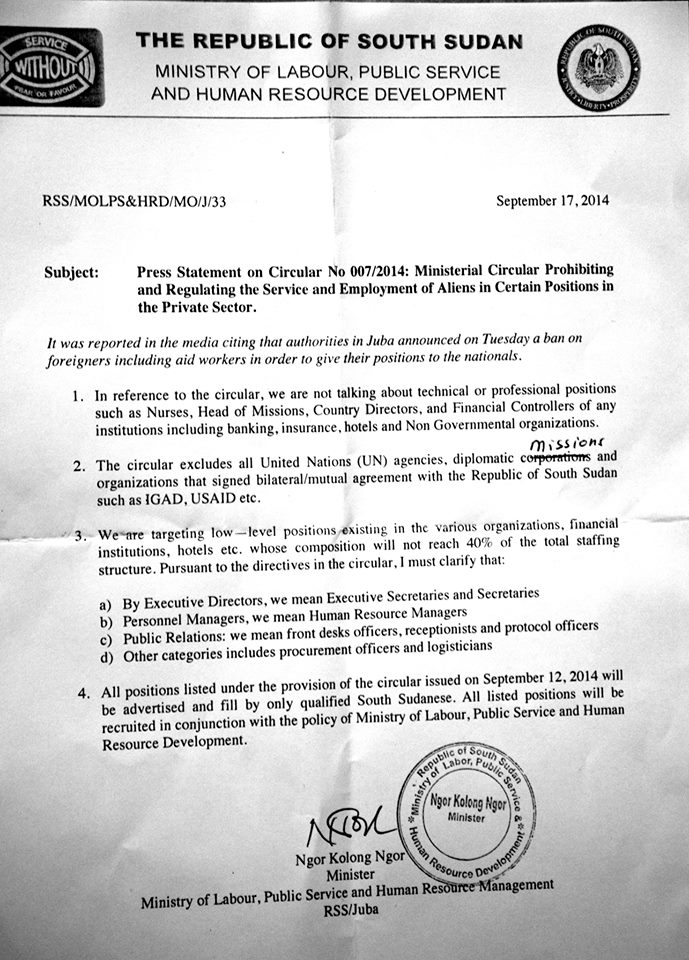 The press release issued by the Ministry of Labour, Public Service and Human Resource Development on Wednesday, September 17, clarifying the original circular.On closer inspection, the bosses behind successful companies like Zain, MTN, Gemtel as well as financial and insurance companies like KCB and Equity Bank are often not South Sudanese.

These workers and executives have given their best to South Sudan. Why should South Sudan now reject them simply because they are foreigners?

Just over three years since South Sudan became a state in its own right, the fact is that foreign investors bring in businesses that locals are unfamiliar with after decades of civil war. Illiteracy and lack of work experience are rife in South Sudan, hence the need for foreign expertise. So should we block people from coming from abroad?

A number of investors in South Sudan, speaking on the condition of anonymity, voiced concern that many locals were not suited to the jobs. Among these, a lebanese investor argued that many South Sudanese are not yet competent for cooperate working conditions”.

South Sudanese are not yet competent for cooperate working conditions”.
A Lebanese Investor

But alongside criticism of the rationale behind the government’s decree, the u-turn fuelled concern about the competence of South Sudanese leaders, already under scrutiny for their inability to quell violence which has killed thousands and forced many to flee their homes.

The aim of the controversial statement was clearly to secure jobs for nationals, though the policy was unrealistic. It is obviously unfeasible to ban foreign workers within the space of a month, especially when many work with the country’s displaced population – estimated at one in seven citizens - need urgent humanitarian aid.

Also read:
Juba residents suffer after Boda-Boda ban
by Robert Obetia Okuga | in Society | 30.09.2013This week’s decision follows in the footsteps of other political u-turns. In September last year,  South Sudan’s ministry of transport made headlines by banning all foreign motorbike taxis, known as ‘boda bodas’, in a bid to create jobs for locals and prevent crime.

The boda boda drivers returned home, often taking their motorbikes with them, leaving the city short of its most popular public transport – while crime remained high.

Such decisions leave the government struggling to retain its reputation and shine a spotlight on the inadequacy of their communications policy.