Um al-Hassan al-Hawarriyya was an iron lady who subdued the desert. Owner of the first café on the 594-kilometre desert road between Dongola and Omdurman, linking Khartoum to northern states along the border with Egypt, al-Hassan became a legend.

For several years, al-Hassan’s Café served as a beacon for people in the desert. Built by al-Hassan and her husband in the 1940s, the café back then was 141 kilometres from the city of Omdurman. Al-Hassan used to live with her children and grandchildren in a house three kilometres away from the café in an area with no services or schools.

When I founded the café, the place had no people.

Al-Hassan died at 101, leaving three daughters and four sons. She was buried in Ganatti in the Northern State because at the time there were no graves.

Now, the region has a number of cafés owned by her sons and cousins but they are no longer as important as they used to be, given the establishment of many cafés and residential areas, the most famous of which is al-Tamam.

Al-Hassan opened her doors to those crossing the desert road for nearly six decades. She remained steadfast in this arid road with its barren desert and dunes of quicksand where people used to travel at night to avoid the scorching sun.

The first to drive on this road was driver Muhammad Satti of the village of Urbi near Dongola. He moved to Khartoum and was a trader. In 1934, he bought a Ford and then thought of traveling from Omdurman to Dongola across the desert. He did it using a compass and a large quantity of white lime to put as markers for the return journey.

In an interview with the Sudanese national television a few years before she died, Um al-Hassan said: “When I founded the café, the place had no people. It was a vast sprawling desert with no water or shadow. My husband and I used to bring water from a very far distance that took us 10 hours on sumpters. The nearest village or residential gathering was 12 hours away. My first clients were truck drivers.” Two of her first clients were Ali Farsab and Sayed Ahmad Abdelmajid, who crossed the desert for the first time in 1948.

My first clients were truck drivers.

At the inauguration of the new road, which passes through the same old road with a few differences, President Omar al-Bashir honoured Um al-Hassan and established a mosque in the region which is known now as Um al-Hassan. It is said that she remained running the café as a rest place for eighty years.

Um al-Hassan became so familiar with the desert and the movement of trucks so well, she used to know the driver based on the noise of his truck. In the 1970s, the procession of former President Jaafar Nimeiri passed that road. He offered to build a retreat for her but she refused because at the time the area was not inhabited. She asked him to dig a well to solve the water problem. He instead provided her with a water tanker that quickly broke. Then a well was dug by a philanthropist of the Kerma area near Dongola. Since then, the café has become a magnet for all passers-by to get water.

Um al-Hassan was tall, active and sturdy and she had a strong personality. Her facial features reflected cruelty and harshness, attributes gained from her desert environment. She belongs to the Hawaweer, a Sudanese tribe that lives in steppes and takes up grazing and agriculture. Its pastures are on the desert strip that extends in Kordofan and Northern State. Other Bedouin tribes like al-Surab, al-Hassaniyeh, al-Kababish and others live close to them.

Al-Hawaweer are pioneers in terms of peaceful co-existence among tribes, given their sound nature and because nomadic life has taught them and provided them with wisdom. They know that what they can take with peace and that dialogue does not come with war. They are also knights. Some of their elders and wise men are notorious for settling disputes. 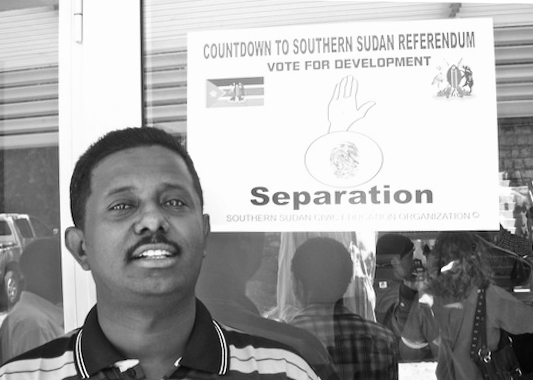