Born into a society where a girl is three times more likely to die in pregnancy or childbirth than she is to get eight years of education, Tabua Joyce Aber can consider herself lucky.

Among the women who graduated in Uganda's Cavendish University in November, Tabua hails from South Sudan. As married woman and mother of a four-year-old son, she described her struggle to complete her studies. I have a family to take care of in addition to school. It is not easy,” Tabua said. 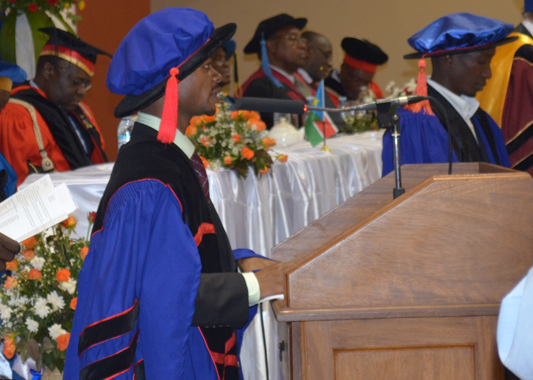 The Cavendish University Registrar, Semakula Saidi, November 25.
© The Niles | Ochan HanningtonAccording to The Academic Registrar of Cavendish University, just 17 out of 64 South Sudanese graduates were women. These low numbers reflect enduring cultural norms: Most South Sudanese girls are told from a young age that they will be married off while their parents invest in educating their male siblings.

Tabua, however, is among the women starting to question the widespread belief that there was no point educating a daughter:
An educated female can be of help to her parents as well as a male child,” she said, adding that she continued to do her housework as well as her university work.

A well educated community has a better life than the less educated one. Therefore, giving opportunities to all citizens to go to school is important,” Deputy Vice Chancellor of the University Frywell Shaba Chirwa said, adding that education is a springboard to future success for the African continent.

My husband helped me get into school to continue my education.”
Tabua Joyce AberBut to this day many South Sudanese view their daughters as a source of income, via the dowries they will earn from future husbands. To generate this income as soon as possible, they often marry their daughters off at an early age, despite the health risks associated with pregnancy at a young age.

Tabua's story is no exception: She dropped out of school and got married. But she was lucky because her partner supported her aspirations. My husband helped me get into school to continue my education,” she said.

According to UNICEF, South Sudan has got the worst record for girls' education on the planet. Statistics show about 90 percent of women in South Sudan are illiterate.

Against this backdrop, Tabua with her newly-earned diploma in Business Administration, urges her government to do everything in its power to give children equal opportunities to study. Females can be as helpful as males but they are not given opportunity to go to school,” she said.

Addressing the 360 fresh graduates at his university, Chirwa said: Higher education is important for a better and prosperous future.” 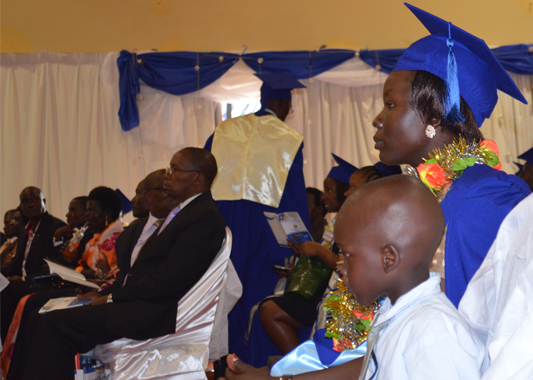 Tabua with her four-year-old son at the ceremony on November 25.
© The Niles | Ochan HanningtonBut that message has yet to gain common acceptance in South Sudan where Chirwa's prosperous future” also remains elusive.

According to a 2011 report by UNESCO, only one in 20 girls finish primary education and girls are half as likely to complete their studies as boys.  Further, the report says that few make it through to secondary school. The numbers finishing college and university education is smaller still.

But it will take a concerted effort to challenge entrenched traditions about girls' education.

Many young women who marry at a young age fall pregnant and scrap their studies to look after their babies and keep house. Tabua, however, urged other women to juggle their responsibilities with school work: I have been there, too. Everyone needs education no matter what,” she said. If you get a chance to continue your education, do not hesitate to take the opportunity.”