HIV/AIDS on the rise in South Sudan

HIV/AIDS was once rare in South Sudan, but following independence, immigration has increased and the disease has spread fast.

In the country where illiteracy is common, many remain ignorant about the disease and do not use condoms. In Lakes State, the AIDS department explains that HIV/AIDS positive locals tend to avoid anti-retroviral treatment because of the social stigma.

The people who are positive will be involved in sexual relationship with the rest of the community and it spreads fast,” Laat Makuek Manyiel, a clinical officer in charge of anti retroviral therapy in Rumbek state hospital said. 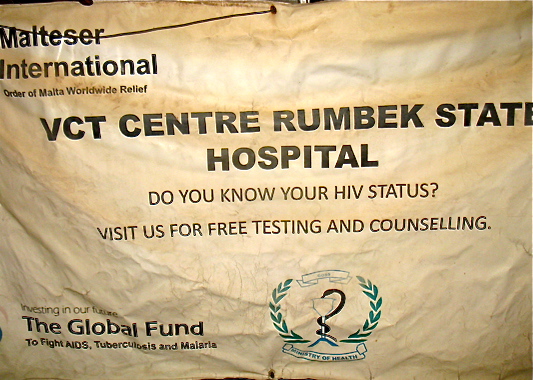 The sign board of the VCT centre in Rumbek.
© The Niles | Benjamin Majok MonWe have 147 females and 61 males that have enrolled here this year,” he said, adding that men were often reluctant to accept voluntarily counselling and testing services in the state.

He said that half of the numbers enrolled come from Lakes State. They have all have terminated their anti-retroviral treatment because of discrimination and stigma in the community.

Manyiel added that the people accepting medicine from the centre originally come from Uganda and Kenya.

The local nickname for HIV/AIDS, Adarwal, meaning ‘disease without cure’ also discourages locals from coming for testing and treatment.

Given widespread reluctance to take the test, concrete figures on HIV/AIDS were not available. Manyiel said that during a test of 2,700 people last year, 24 were found HIV/AIDS positive.

However, those who tested positive faced widespread social prejudice. They are discriminated in the community, workplace and social settings. This stigma means they do not reveal their HIV status,” he said.

South Sudan’s decades-long war meant that the country was largely protected from HIV, but after the borders opened, internally displaced people and refugees are increasingly moving into the country, bringing HIV and AIDS with them.

Isaac Mabor Meen, counsellor at the hospital, said that HIV is a major threat to the population in Lakes State: Infection will be high because locals reject the use of condoms.”

Emma, an HIV positive woman from Uganda, encourages South Sudanese people living with the HIV/AIDS virus to continue with treatment. I was tested positive in 2005 in Uganda but I had been under treatment making me look healthy,” she said.

Emma moved from Uganda to South Sudan in search of work in Lakes State, to help support her three children. She is working as waitress and prostitute in a hotel in Lakes State but says she doesn’t have unprotected sex. I will encourage the men to use condoms,” she said. I am not interested in sex because am worried for my life. I do not want to die very soon because of my three children,” she said.

A report from the United Nations Development Program (UNDP) said that South Sudan is in the midst of HIV/AIDS epidemic and most of its people are without clean water, sanitations and education services.

The report said that HIV/AIDS epidemic in South Sudan has now moved beyond high-risk groups and into the general populations which is largely illiterate. Poverty, health and education propel the spread of the disease, UNDP wrote in its report. 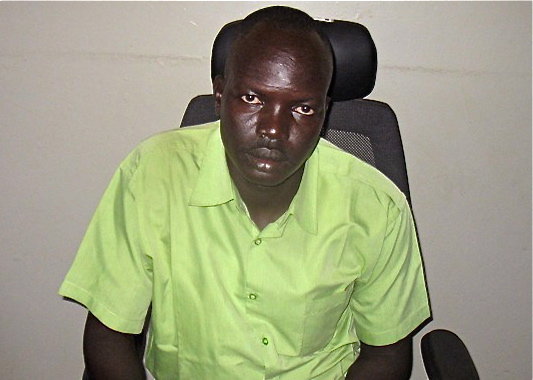 Laat Makuek Manyiel
© The Niles | Benjamin Majok MonRecent statistics are hard to find but Alliance South Sudan categorised the disease as a generalised epidemic saying it had a prevalence rate of three percent at the end of 2010. An estimated 128,000 people are living with HIV.

The epidemic is worst in Western Equatoria and the southern part of the country where rates are as high as 10 percent compared with less than one percent in more rural central areas.

The capital Juba has a prevalence rate of six percent. Populations most at risk of HIV infection include refugees, internally displaced people, soldiers, truckers, sex workers and tea sellers, as well as women and young girls in general.

Hidden at the back of one of Rumbek’s most sprawling markets are rows of tin warehouses where prostitutes work.

One among 11 Ugandan sex workers said she was mother of five but declined to give her name. She said her business is profitable, earning more than hundred South Sudanese Pounds per day, however, she realised that she was at risk of contracting HIV/AIDS.