The recent graduation of 23 girls from Loreto Secondary School in Rumbek, November 2013.

The recent graduation of 23 girls from Loreto Secondary School in western South Sudan was cheered by regional leaders, who hope it triggers improvement in the nation’s dismal record on schooling girls.

Our state is training quality women leaders for the future,” said Chol Kuotwel a member of parliament for the region, adding that the girls showed leadership skills and spoke good English.

He said that for the state government hopes to improve the quality of education, despite an ongoing shortage of trained teachers.

These girls will make a difference in our society.”
Philip Thon MaditThe schooling sets these students apart from the vast majority of their peers. UNICEF has estimated that around one percent of South Sudanese girls completes primary education.

Philip Thon Madit, ACROSS Field Officer, said the girls had a solid all-round education, adding that these girls will make a difference in our society”.

We will not send our girls to Uganda and Kenya,” Madit said. Education is best when it is at home.”

Hundreds of parents, relatives, friends and government officials attended the recent colourful graduation ceremony. Sister Orla Treacy, the school principle told the crowd: This is the first time in the history of South Sudan that 23 girls graduate in one secondary school.” 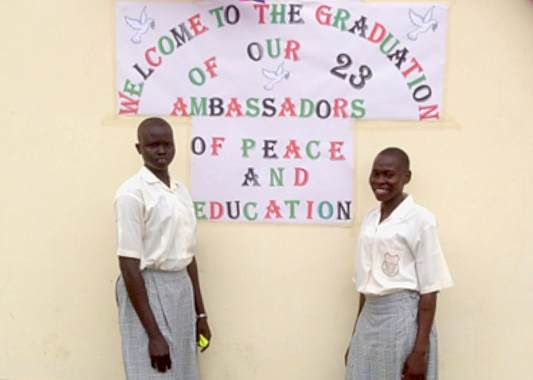 © The Niles | Majok MonShe said she hoped the ceremony would serve as an example to the people of Rumbek and would encourage them to prioritise girls’ education. She urged parents not to force girls to marry and pull them out of school. If you bring your daughter here, wait until she finishes the secondary school,” she said.

However, such a decision contradicts long-standing tradition. Many parents decide to marry their daughters off due to poverty or cultural norms. Machar Dhuol, the spiritual master, said those who educate their daughter are stigmatised.

Many parents who refuse to marry off their daughters are not seen as good people by society,” he said. I have rejected many marriage proposals for my daughter.”

Honorable Kedit Madol Kedit, chairperson of a security committee, added that the society needed a rethink on women’s value to society. Girls in our culture are considered a cash crop, but now we know their true value.”

Girls in our culture are considered a cash crop, but now we know their true value.”
Kedit Madol KeditBut although the Loreto school is encouraging girls to study, girls in South Sudan generally are not so lucky. Across the nation, a girl is three times more likely to die from child birth than to enter Grade eight, UNICEF has reported.

The 2010 Sudan Household Survey (SHHS) showed that four in ten girls get married when they are still children, putting them at a much higher risk of pregnancy related complications and death.

Hellen Nyankok Mangar from the senior four class said it has not been easy for her generation to access education, explaining they had weak language skills due to bad teaching in primary schools. But we are now fluent,” she said. It is a privilege to be in Loreto school which is impacting live of women in Lakes State.”