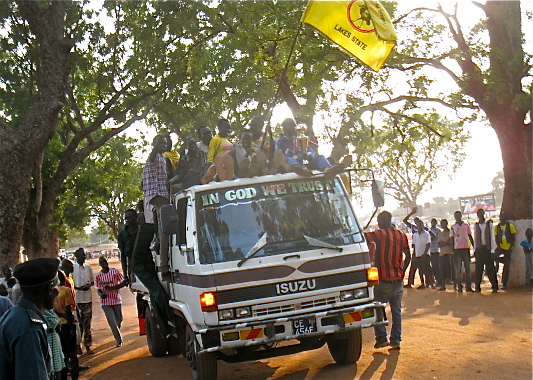 Fans in Rumbek cheer girls who won athletics and basketball competitions, August 3. © The Niles | Benjamin Majok MonWe need to encourage girls and persuade their parents to allow them to play football,” says William Madong Mading, director of the Lakes State Ministry of Culture, Youth and Sport.

Girls football is a wonderful game. This is a new beginning in South Sudan and especially in the four Dinka community states,” he says, adding that more coaching was needed to enable them to compete on an international level.

But a range of prejudices prevent most South Sudanese girls from playing sports. Adit Marial Bout, who has just won an athletics competition for Lakes State, is familiar with the problems which keep women away from football pitches and racetracks.

My fellow girls are kept at home to fetch water and cook food. They are not allowed to participate in games,” she says.

On her local Freedom Square very few girls join in with the boys who congregate there to run and kick footballs. Girls are viewed with suspicion if they are allowed to play sport with boys, parents think they will be impregnated and they lose the value of cows because they will not get a dowry.”

Adit is an exception to the norm: In early August she won the girls’ athletics cup during the South Sudan states inter-schools competition. Young athletes compete in Rumbek, August 3. © The Niles | Benjamin Majok MonBut pursuing her hobby had been hard, she explaines. People have laughed at her while she was training and some people have even warned her that she is doing something bad.

However, she has not been swayed by the taboo. I am proud to be the role model for girls in Lakes State. I achieved this through hard work and determination. I won 400 meters, 100 Meters and high jumps for girls in the ten states of South Sudan.”

Football, in particular, has long been considered a no-go sport for girls. But times are changing, gradually. Encouraged by emergent support, South Sudanese women are starting to play and talk about football amongst themselves. These days, women are increasingly keen to take part in football competitions.

And the recent inter states secondary schools national tournament in Lakes State was a good advert for the sport. Spectators agreed that the girls’ football match was amazing to watch and an good antidote to scepticism about girls’ abilities on the the pitch.