The hidden cost of malaria in South Sudan: $2 million and counting

Mosquito nets are promoted as effective malaria prevention, but some say they’re not enough.

In South Sudan, as in some other countries, the millions spent on treatment and prevention could be channelled into better health care infrastructure if malaria weren’t so prevalent.

The number of malaria cases may be drastically reduced if a new vaccine showing promising results is approved for distribution. But in the meantime, South Sudan is spending a huge amount” combating the disease, according to Obuya.

Most of that money is spent on the purchase and distribution of mosquito nets, as well as malaria drugs. But since results have been less than encouraging so far, the government's new strategy is to spray DDT in homes and rural areas throughout the country.

The government is also considering other alternatives, including a home-based management program that would dispatch health workers to provide prompt and effective care to malaria patients closer to their homes, especially children under five.

Since the signing of the 2005 Comprehensive Peace Agreement that ended 22 years of civil war, a global fund has invested $28 million on malaria control. Another 72 million will be allocated for the effort until 2014.

A variety of treatment

While precise figures for malaria infection rates in South Sudan are not known, estimates made by various NGOs are similar: three out of every ten patients succumb to the disease.

Access to health care is difficult for most South Sudanese, and few can afford the price of malaria treatment offered by private clinics.

At one of them in Juba, two days’ admission for malaria treatment costs 1,300 South Sudanese pounds, or about $350.

In smaller clinics on the outskirts of Juba, patients pay $15-20 for a scaled-down version. 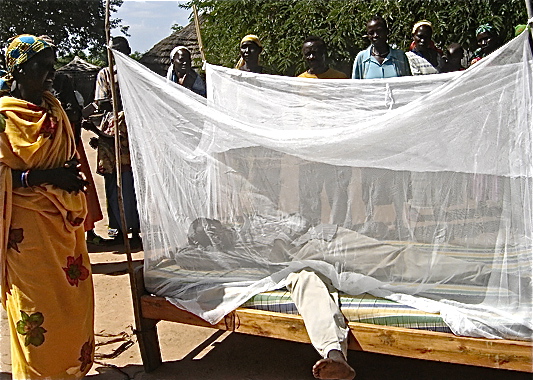 Patients typically pay $10 to be tested for malaria, while medication to treat it costs $20. Add a consultation fee, painkillers and preview fees for an outpatient malaria carrier, and a visitor to a health clinic may part with up to $100.

In a country where the majority of citizens live on less than two dollars a day, that represents a tremendous” burden, according to Dirk Holsen, an economist and former adviser to Sudan’s Trade Ministry.  If malaria had been eliminated from the region, funds spent on prevention and treatment could have been invested in modernising the health sector long ago, he said.

At Juba Teaching Hospital, Sarah Keji, a vegetable farmer from a neighbouring village, sought treatment for two of her three children who had been suffering from the disease for the last three months.

Besides spending the equivalent of several dollars for transport to the hospital each day, Ms. Keji said she pays nurses extra for more attention” to her children.

I wish the government would bring health services closer,” she said. Our children will die.”

Besides the debilitating physical effects of the disease, malaria often takes an additional toll on education and future productivity.  A young South Sudanese with malaria has a higher chance of missing school and even dropping out.

In some cases, the impact can be psychological. 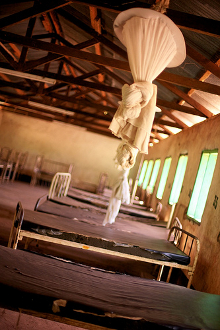 In more remote areas of South Sudan, myths surrounding the disease can lead to isolation because of mistaken beliefs that malaria is contagious. If someone falls ill, he or she may be removed from rest of the family. When siblings or parents are affected, the first person to get sick is often suspected of infecting the others.

A number of NGOs in the health sector have embarked on the distribution of mosquito nets as a prevention measure.  About three million nets have been distributed by the National Malaria Control Office in South Sudan so far.

But some experts disapprove of the mosquito net distribution strategy.

If the mosquitoes are not killed, there is no prevention going on,” said Dr. Leonard Obuya at Juba’s Kampala International Hospital.

In his view, the government should develop a management policy to eliminate the insects altogether. A spraying program could be carried out in accordance with their movement patterns: during the rainy season, mosquitoes are more often outdoors, while they come indoors in the dry season.

A new vaccine that has been in development for the past 23 years is in an advanced test phase. Known as RTS,S, or Mosquirix, the drug is aimed mainly at children, who are most vulnerable to the disease.

A report by the Bill and Melinda Gates Foundation says 15,000 children in seven African countries are participating in the trial, which represents the greatest progress of any malaria vaccine so far. If approved, Mosquirix is expected to reduce the number of malaria cases by half.

According to the World Health Organization, Africa spends $12 billion fighting malaria every year.  Analysts warn that if the disease is not totally eradicated from the continent, African economies will continue to lag behind the rest of the world.