The Niles 15
The dam issue

Be it to improve irrigation, manage floods and droughts or generate energy, dams have played a significant role in humanity’s progress.

But the dam-building development model also has its flaws. And with the impacts of climate change starting to threaten livelihoods, many argue it’s time to protect and even restore our free-flowing rivers the world over.

The development-conservation-dilemma is hard to address, particularly for transboundary rivers such as the Nile. Saving the shared resource while providing for the Nile Basin’s growing populations requires transboundary cooperation.

The Niles journalists, who hail from across the Eastern Nile Basin, have tackled the highly sensitive dam topic and have no easy answers. But self-aware that they all are in the same boat, they agree that it is time to start rowing the same way. 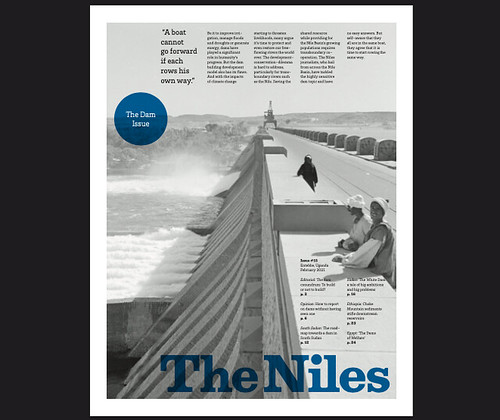 Editorial
The dam conundrum: to build or not to build?
MiCT The Niles | Berlin, Germany
The ancient technology of dams has fuelled human progress. Yet countries building and managing dams, especially in transboundary river systems like the Nile, face complex and difficult challenges.

The cascade effect
Sharing information, knowledge and experience
MiCT The Niles | Berlin, Germany
The interdependency of dams in a river system demands coordinated operation, so all dams have an optimal configuration that, in the interplay with all others, minimises risks and maximises mutual benefits for all riparian states.

Comment
How to report on dams without having seen one
Rehab Abdalmohsen | Cairo, Egypt
Reporting on dams in the Nile Basin is a tricky endeavour – even more so if you’ve never seen one.

Risks, actions & benefits
Do dams cause more problems than they solve?
MiCT The Niles | Berlin, Germany
All across the Nile Basin, dams generate power, store drinking and irrigation water, as well as preventing flooding and creating spaces to relax. On the downside, dams, especially poorly maintained structures, can endanger local people, especially in the context of a rapidly changing climate.

Comment
The roadmap towards a dam in South Sudan
Francis Wani | Juba, South Sudan
Many people are thinking about introducing dams to South Sudan – but a systematic approach is needed before becoming a reality in the country.

Review
Can South Sudan relaunch its Fula Dam project?
Nema Juma | Juba, South Sudan
South Sudan’s plans for the Fula Dam have long been in place, but a multitude of obstacles have halted the project.

Interview
“I don’t think the dam has a big effect”
Alaa Eliass | Khartoum, Sudan
Hatim Abdelhadi, a 30-year-old lawyer in Sennar, talks about how the Sennar Dam changes the lives of those living alongside it.

Photostory
‘The Dams of Welfare’
Asmaa Gamal | Cairo, Egypt
The city of El Qanater El Khayreya emerged after a dam was built and has since become a magnet for local and foreign tourists alike.

Review
Do we need a framework for dams?
Waakhe Simon Wudu | Juba, South Sudan
The Eastern Nile Technical Regional Office (ENTRO) is drawing up a coordination framework for dams in the region, aiming to ease conflicts about dams and water supply in the future.

Editorial
The dam conundrum: to build or not to build?

Dessert
Taste the Niles
All articles are available for republishing. Please notify us via email when you syndicate our content. Thank you!
© 2021 MiCT, all rights reserved.