Addis Ababa is the capital of Ethiopia as well as the seat of the African Union’s headquarters and a fast-growing urban area. Increased vehicle emissions, traffic road dust, industrial development, large construction activities, and overall land use practices have had a hazardous effect on the air in this busy city.

Although Addis Ababa is located along the foothills of the Entoto Mountain’s vegetation cover, old vehicles release toxins into the microclimatic atmosphere with severe health and social effects to those exposed to the pollutants.

“You cannot inhale clean air around my village,” said Samirawit Yimer who lives near Autobus Tera in Addis Ababa. “My son recurrently gets colds. But no medical practitioner has confirmed that the reason is air pollution.”

The Ministry of Environment, Forest and Climate Change (MEFCC) and the City Government of Addis Ababa Environmental Protection Authority (AAEPA) do not possess sufficient and updated documentation to prove otherwise.

Anecdotally, however, one will likely notice in other cities, like Bahir Dar, the capital of the northern Amhara Regional State, the pavement along the road is surrounded by palm trees and other ornamental vegetation.

There is minimal, improper or not enough vegetation cover along the pavement of Addis Ababa’s roads, where vehicular emissions cause a rapid deterioration of ambient air quality and the environment, with consequent danger to human health. 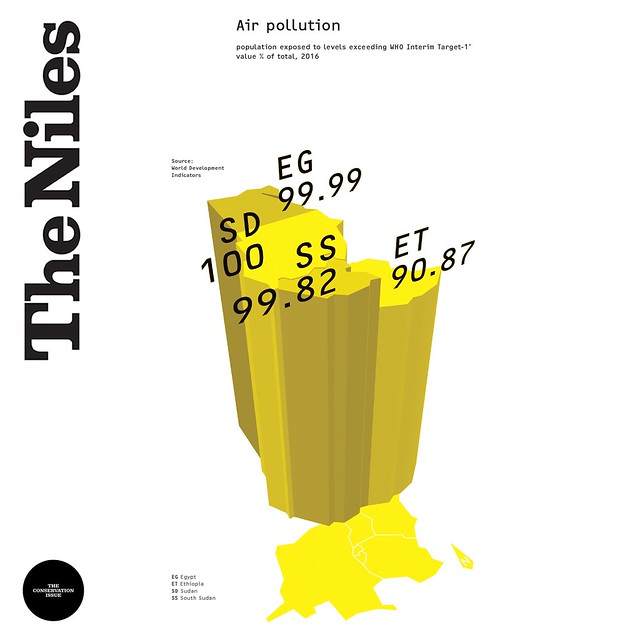 Saeid Abdela, Director of Climate Change Mitigation and Adaptation Directorate at the AAEPA said that the transport sector is a primary source of air pollution in the city.

“Importing a large number of used vehicles, a scarcity of road networks, vehicle engines operating with serious malfunctions and unsatisfactory or insufficient annual vehicles inspections are the major causes for severe vehicular air pollution in the city,” according to Saeid.

Vehicular-Smogless Air for Ethiopia (V-SAFE) in collaboration with AAEPA, conducted a baseline study on the effect of motor vehicles on air pollution in Addis Ababa about six years ago.

The study found that carbon monoxide (CO) levels were two to six times higher than the World Health Organization (WHO) standard; seven to 19 times the Chinese Standard and two to five times the Brazilian Standard. Epidemiological studies have correlated high CO concentrations with heart disease, childhood developmental abnormalities and stillbirths.

Half of the vehicles tested produced about 90 percent of the hydrocarbons (HC) and CO emissions. Both ambient and vehicular HC, CO and particulate matter (PM) levels are well above worldwide standards for human and environmental health.

The Vehicles Technical Assurance Directorate at the Federal Transport Authority, after conducting a study on vehicular emissions recommended the ministry of finance to impose high taxes on old, imported vehicles and keep taxes low on new vehicles. Yet, there has been little response from the government.

“Most old vehicles should be banned from Addis Ababa. However, there are economic issues which push the government to be silent in this regard, said Daniel Seifu, Control Core Process Head at the Federal Transport Authority. “Old vehicles are the source of income for most taxi drivers in the city,” he said.

Most old vehicles should be banned from Addis Ababa.

There has not been a significant measure taken by the government to avert the ongoing air pollution. AAEPA is expected to update the previous baseline study and the federal government has introduced a cycle transport system and electrified light rail transit transport service, according to Saeid.

“I have observed a lot of old cars and taxis,” said Yimer, who lives near the bus station. “It means they are emitting huge amounts of greenhouse gases. The government should consider international practice: ban old cars from the city, use public transport instead of private cars, use electric cars, and avoid garages and parking lots from nearby schools.”

Even though I am an Ethiopian-based journalist and write so many articles on the spread of the water hyacinth, I got the invaluable chance to discuss the extent of the problem with colleagues at The Niles workshop in Bahir Dar. We also had an opportunity to witness the scope of the water hyacinth problem on Lake Tana and realised how the lake is at tremendous risk. We took the issue as a trans-boundary problem as Lake Tana is the source of the Blue Nile. The Niles workshop along with the field trip has inspired me to look at various environmental issues and write articles about them.
Share this article:
Facebook
Twitter
Google+
Visit us:
Facebook
Follow us:
Twitter
Permalink:

Towards a green digital revolution

Directions
Plant crops in the city

In the shadow of the media spotlight: Lake Tana
All articles are available for republishing. Please notify us via email when you syndicate our content. Thank you!
© 2022 MiCT, all rights reserved.