Rethinking conservation
What price are we willing to pay?

The Niles contributors at the shores of Lake Tana, August 2018. (photo: The Niles | Bullen Chol)

On August 14, 2018, a group of journalists from the Eastern Nile Basin countries gathered in Bahir Dar, Ethiopia to map out this issue of The Niles, taking a closer look at the causes of environmental degradation in the Eastern Nile region as well as efforts to reverse some of the damage that has been done.

During a three-day meeting, the journalists delved into research, exchanged, collaborated and had conversations that echoed the current worldwide debates about environmental degradation.

The cross-border stories that resulted from the meeting, span pollution concerns, the destruction of ecosystems, the depletion of natural resources and the main drivers of environmental degradation in the Eastern Nile region.

Nile Basin countries in 2016 haven’t produced more than 0,8% of the world’s emissions.

All African countries together emitted less CO2 in 2016 than Russia alone, according to the Global Carbon Atlas, yet Russia was ranked fourth in a list of the top 20 countries with the highest CO2 emissions.

The top five – China, the USA, India, Russia and Japan – together emitted over 57 percent of the world’s total emissions.

The top 20, which included one African country (South Africa) accounted for over 77 percent of the world’s emissions.

In contrast, all the Nile Basin countries in 2016 have not produced more than 0,8 percent of the world’s emissions. Within the debate of equitable sharing of responsibilities, this information is important. It is also crucial to build upon collaboration to start addressing global warming and environmental degradation.

We live in a time when each of our actions should be an internal negotiation, making cost-benefit analysis for each of our acts. We must however entirely be aware that we, alone, are not the ones to pay the price, rather our planet and future generations.

Ninety-three percent of children worldwide inhale poisoned air. Experts estimate that 600,000 children died in 2016 as a result of air pollution.

In just over four decades, livestock populations around the world have decreased by 60 percent, according to the World Wildlife Fund’s (WFF) Living Planet Report.

More than 4,000 mammal, bird, fish, reptile and amphibian species have shrunk dramatically between 1970 and 2014. Pollution, deforestation, climate change and other human-made factors have led to a crisis, according to WWF.

There is much to be considered when we talk about conservation. Colonialism, exploitation, economic growth, the gender gap, health and education are all debates which affect and are affected by conservation. Perhaps the wheels of consumerism, capitalism and growth are too far in motion for the brakes to be considered.

We must roll up our sleeves and put our individual, communal, national and economic interests aside.

It is, however, the most profound human belief that we forge our own destinies and that we are the sole guardians of our future. We must roll up our sleeves and put our individual, communal, national and economic interests aside, in favour of a shared liveable future Earth.

As individuals, we might not consider the impact of our actions in such a global way. Many jobs nowadays rely on flying halfway around the planet.

The making of this very publication brought 25 people to Lake Tana, the threatened source of the Blue Nile. Nevertheless, we all decided that the CO2 emissions of 25 journalists flying from six different countries to produce this The Niles print and online issue, were a cost we were willing to burden our planet with.

We sincerely hope we made the right choice. 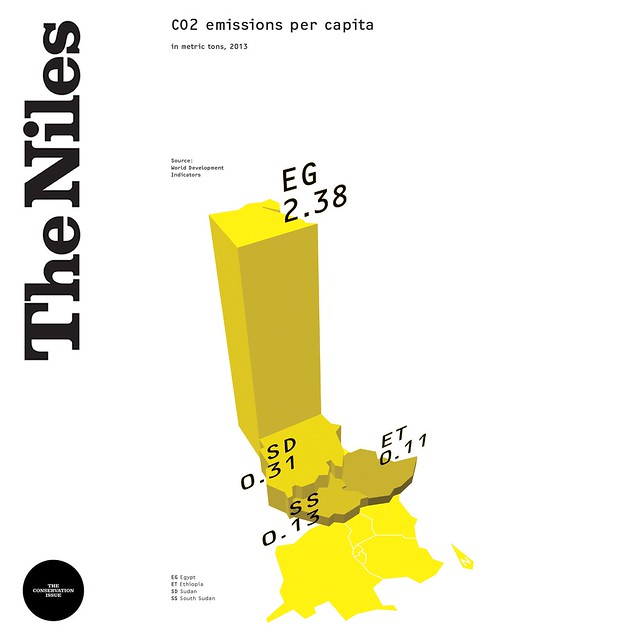 The Niles #18
The cross-border conflict and collaboration issue

re‹think the way we communicate
About sharing resources

The Niles #17
The re<think issue

Editorial
The board is bigger than we think
All articles are available for republishing. Please notify us via email when you syndicate our content. Thank you!
© 2022 MiCT, all rights reserved.