The sounds of a myriad of birds, insects and mammals welcome visitors as they enter Kibale National Park in Western Uganda.

The rain forest is abounding in flora and fauna and hosts big mammals such as elephants, buffalos and antelopes, as well as reptiles. The park is also home to around 325 different bird species such as black-capped apalis, red-faced woodland warbler and purple-breasted sunbird, African pitta, little greenbul and blue-breasted kingfisher.

Godfrey Baryesima, the park’s head warden says the forest also has 13 different primate species such as blue monkeys, galagos (bush baby), pottos, vervets and baboons, but also less common species such as the l’ hoest’s monkeys. Baryesima adds: “We have black and white colobus; we have the grey cheeked mangabey – this is unique because it is only found in Uganda.”

However, Baryesima explains the park is famous for other inhabitants, the chimpanzees.

A dozen chimpanzees make alarming sounds as we approach them. Within a few seconds, more chimpanzees come running and join the group that is about 10 meters from where we are. “They have heard friends” potentially in need of help, explains our guide Alex Turyatunga. He has worked in the park for over five years, and his observations let him conclude “chimps behave like humans”. 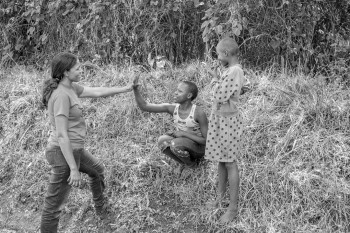 But our distant relatives, like all the other animals in and around Kibale National Park, face severe challenges, mostly from us humans. Lilly Ajarova, the head of the Uganda Tourism Board, explains that besides poaching, the cutting down of forest leaves animals with less space to live in and not enough food to feed on. Ajarova says encroachment on forests heavily affects the lives of animals. “In Uganda, just like it is all over Africa, wildlife has lost a lot of habitats.”

Wildlife has lost a lot of habitats.

Although forests play an important role in the survival of wildlife, as well as preventing soil erosion and mitigating climate change, many people directly depend on forests for timber and fuel.

Uganda’s forests have been under severe pressure mainly from the expansion of agricultural land as a result of a growing population, increasing demand for charcoal and fuel, unchecked logging and weak legal protections and even weaker enforcement of the forest protection laws.

At Bigodi village, about 4 kilometres from Kibale National Park, people know that they can only survive in the long run if they protect the forest and animals. There, women make art, mats and baskets from materials they collect in the forest, which they then offer to tourists visiting the national park. Others make a living from beehives in the forest, harvesting honey at least twice a year. 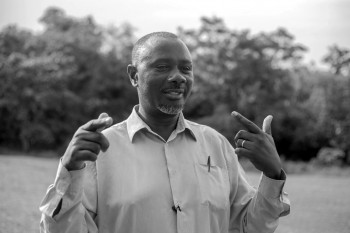 John Tinka even went a step further, he and his family accommodate tourists – local and foreign. “Without wildlife, I wouldn’t have this business here, it is because of the wildlife that tourists come into this community to see chimps and other primates in the forest and then they need a place to stay,” he says. “The money I get here helps me to run the family.”

Without wildlife, I wouldn’t have this business.

Tinka, 56 years old, was born in what is today Kibale National Park. By then his parents and siblings survived on hunting. Today, Tinka earns about 10 million Uganda Shillings (US$ 2,700) per month in a business mainly run by his family; his wife, children and relatives – without killing wildlife.

Lilly Ajarova says it is very possible for humans to live well alongside wildlife, adding that people need to be informed of these benefits so they can help in protecting the wild. “Strategies like community tourism or ecotourism would be a better way of getting everybody to benefit socially, economically and environmentally.”

Ajarova suggestion certainly won’t be the silver bullet to save Uganda’s rich natural heritage, but it can be one piece in a comprehensive plan to stop the ever-accelerating environmental degradation if done with careful considerations. Merely seeing the business aspect of conservation bears significant risks, as potential profits are hard to resist.

The government seems convinced it is the right path: to give momentum to Uganda’s conservation efforts, the government provides seed capital for entrepreneurs living near the country’s national parks with ideas to protect the wildlife.

Ingredients
Reap what you sow!
All articles are available for republishing. Please notify us via email when you syndicate our content. Thank you!
© 2023 MiCT, all rights reserved.