Recent developments concerning media clampdowns in Southern Sudan point to a future environment where freedom of expression, especially that of the press, could be threatened. 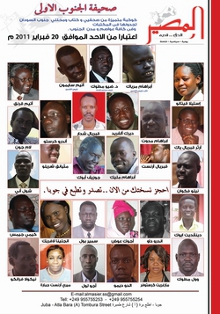 Newspapers such as al-Masir (The Destiny) have faced harassment. The chief editors of two Arabic-language newspapers in Southern Sudan, al-Masir and al-Istiqlal (Independence), published a joint report exposing prohibition of the papers’ distribution in Southern Sudan. A few days later, the Juba Post reported the confiscation of its paper in Juba.

Given the current tension in Southern Sudan, challenges to the media in times of transition are understandable. The leadership of a country accustomed to a military system that runs on orders and obedience seldom tolerates constructive criticism and calls for accountability.

But it is also reasonable to expect the leadership, or at least some of its members, to foster human rights and press freedom. Violations committed within the institutional framework should be addressed so they will not be repeated.

The future South Sudan cannot be built on a corrupt basis that limits political freedoms and hides behind purported conspiracies or foreign threats to justify illegal and immoral actions.

Media is an integral pillar of nation building in any democratic society; it is the role of a credible and independent press to point out flaws in the process and hold leadership accountable.

As a cornerstone of communication, a media grounded in solid reporting is a vital, two-way conduit between leadership and the public. It should be a reliable source of information if the aspirations and ambitions of the people are to be fulfilled.

But media laws have been relegated to the back burner for over five years. They have yet to be presented to the parliament for approval. Only when press freedom laws are passed can a strong foundation for the media in Southern Sudan be assured.

With high hopes of creating a vibrant media landscape, journalists set their sights on the establishment of a free and independent press in both Arabic and English. English-language newspapers transferred their operations from Khartoum to Juba.

Sudanese journalist Mohamed Faisal Saleh (with Mary Justo Tombe).A short while later, other publications emerged, with two daily Arabic-language newspapers printed in Juba. Due to poor printing conditions there, al-Masir and al-Istiqlal were obliged to publish their editions in Khartoum for distribution in the south.

All of these newspapers function under harsh conditions: poor infrastructure, limited distribution and weak advertising revenues increase their need for support from external sources.

But if neither financial nor technical support can be provided, these publications should, at the very least, be guaranteed the right to contribute to a democratic society without suffering from repression or harassment. The legal provision to safeguard journalists’ rights should be a priority on everyone's agenda.