Another war to wage - the fight against HIV/AIDS

Bonifacio Taban
One effect of the isolation of South Sudan during the over two-decade civil war was a low rate of HIV/AIDS infections. Now the country has to fight a growing enemy, as the case of Bentiu in Unity State shows.
Archive
Share this article:
Facebook
Twitter
Google+
Visit us:
Facebook
Follow us:
Twitter
Permalink:

Creating awareness on HIV/AIDS through drama is common in South Sudan.

About 94 individuals were infected with the Human Immunodeficiency Virus (HIV) as the recent voluntary testing, carried out in Bentiu town, revealed. HIV causes the fatal disease of Acquired Immune Deficiency Syndrome (AIDS). It is transmitted through various ways, protected sex being one of the most common preventive methods. The state health authorities and local organisations are seeking to raise awareness on HIV/AIDS among the communities. 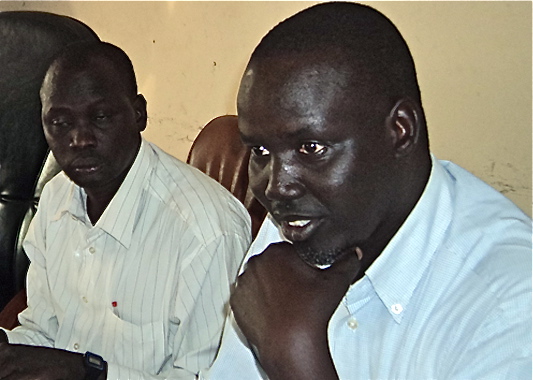 Unity State HIV/AIDS Director Dr. Wichgoah Piny said that the state and local community groups are meeting to plan how to raise awareness on the deadly virus. Piny added: "We have organised a one day workshop concerning HIV/AIDS awareness. Additionally, during the past ten days, the leading agency from Juba, assigned by the South Sudan Aids Commission (SSAC), was present here to cover HIV awareness through supporting local and international NGOs in the State."

HIV/AIDS spread rapidly across Africa over the last couple of decades, killing millions of people. Due to South Sudan's isolation during the civil war, the problem was not widespread here. But now, as a peaceful South Sudan opens up to the outside world, many fear the deadly disease will soon be claiming numerous lives.

Patrick Okoth, who works on HIV/AIDS issues for HealthNet TPO, a group which advises the Government of Southern Sudan (GoSS) on health policies, says that most South Sudanese do not know anything about the virus. Awareness needs to be raised about this threat and about prevention methods all across the country.

The latest survey shows that the level of awareness is very low.” Patrick OkothPatrick Okoth said: "Today we are here with Civil Society Organisations (CSOs) and Community-Based Organisations (CBOs) so that they can help us fight HIV/AIDS in the communities. The results we got from the latest survey showed that the level of awareness is very low. The SSAC and the Ministry of Health cannot do it alone. We want to join hands with all these organisations present in the communities so that we can see how we can improve HIV/AIDS awareness in Unity State."

Wang Gai Nyajuol, a local resident of Bentiu town, said that young people need to be aware of the danger of HIV/AIDS. Nyajuol added that "what needs to be highlighted is that the disease (HIV-ADIS) has no cure worldwide. The awareness of communities should be carried out through dramas, in churches, schools, and health centres. The children have to be taught the danger of this virus. Government institutions have to include awareness strategies in their policies."

Visit the program sites of UNAIDS and UNDPUnprotected sex is one of the most common ways HIV infects the partner(s) of the carrier. Although the virus can stay dormant for years, the infection still occurs, sometimes without neither the knowledge of the carrier nor that of the partner.

The sooner awareness strategies are laid out and implemented, the higher is Southern Sudan's chance to maintain its low HIV/AIDS infection rates, and be the youngest and healthiest country in Africa.