The premises of the Delegation of the European Union to South Sudan in Juba, October 24.

A press release issued by the Delegation of the European Union to South Sudan on October 21, states that the National Security Bill, as currently drafted, could contradict fundamental rights and freedoms enshrined within South Sudan’s Transitional Constitution and extant legislation”.

[The bill] could con- tradict fundamental rights and freedoms enshrined within South Sudan’s Transitional Constitution and extant legislation.”
Delegation of the European Union
to South Sudan

Further criticism comes from within the parliament, saying the session that passed the controversial bill in the third reading did not meet the required quorum, adding that MPs from the Greater Equatoria region protested the passing of the bill by walking out of the parliament during the reading.

Protesters also say the bill did not pass all the necessary stages it is supposed to go through, adding that there has been no public hearing to ensure that public views on the bill are heard and incorporated. The draft bill is yet to be signed by South Sudan’s President Salva Kiir Mayardit before it becomes law.

However, the EU statement also welcomes steps to ensure that the Ministry of National Security has a suitable legal framework within which to operate” but adds that they support recent proposals in the Legislative Assembly and among Civil Society for further discussion of this bill, and a review of its text, to ensure that it complies with both national and international standards”.

We believe that these powers are uncon-stitutional. We would like to see these powers removed.”
Elizabeth Ashamu Deng

According to Human Rights Watch the bill would allow the security service virtually unfettered authority to arrest and detain suspects, monitor communications, conduct searches, and seize property” connected with crimes or offences against the state.

We believe that these powers are unconstitutional. We would like to see these powers removed from the bill,” says Elizabeth Ashamu Deng, a researcher with Amnesty International.

Human Rights Watch’s Africa Director, Daniel Bekele says the scope of the powers granted to the National Security Services flies in the face of international norms and South Sudan’s own constitution, which envisions a (security) service limited to intelligence activities”. 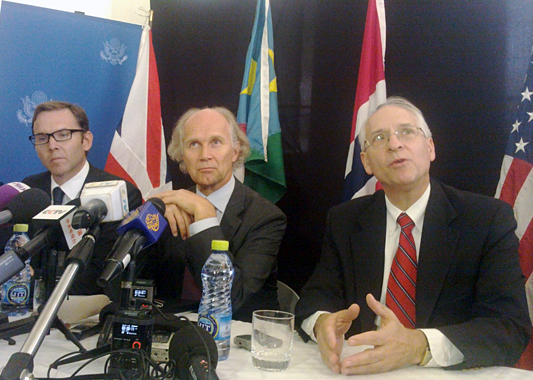 Special Representatives Matthew Cannell from the UK (left), Jens-Petter Kjemprud from Norway and Donald Booth from The US during a press conference in Juba, October 17.
© The Niles | Waakhe Simon WuduThe Special Representatives from the US, UK and Norway to Sudan and South Sudan, who met with President Salva Kiir Mayardit and some of his government officials, say one of the issues they discussed with Kiir is concerns” on the Security Bill, without sharing further details.

In addition to the widely criticised Security Bill, the joint EU statement also addresses concerns over another legislation on Non-Governmental Organisations (NGOs) passed by the Parliament, saying that rather than facilitate their [NGOs] important work, the NGO Bill being debated in the National Assembly has the potential to limit the space in which civil society and NGOs are able to work in South Sudan”.

The Heads of Mission are firmly opposed to unnecessary restrictions on NGO operations and underline the importance of freedom of association and open civil space in any democratic society”, the joint statement reads.

The EU Heads of Mission call upon the Government of South Sudan to allow for further discussion on both bills to ensure that they are consistent with the values and laws of the South Sudanese state, provide sufficient checks and balances, and are implemented in full respect of South Sudan’s international Human Rights obligations”.

U.S. urges South Sudanese leaders to end impunity
All articles are available for republishing. Please notify us via email when you syndicate our content. Thank you!
© 2021 MiCT, all rights reserved.