Sudan’s 2015 elections and the president’s popularity

The National Congress Party (NCP) has adopted the consolidated list method in the last elections, which leaned on the popularity of President al-Bashir. As the 2015 election approaches, the question that arises is as to whether al-Bashir still retains popularity.

Many political and economic events have characterised the nearly five years since the last election where the government has changed hands several times, significant economic procedures have been implemented, the country has witnessed strong protests and South Sudan has gained independence.

All of these events and others have undoubtedly affected the Sudanese people’s view of the government.

If the party depends on one man, down
with it.”
Amin Hassan Omar

Amin Hassan Omar, member of the National Congress Party leadership office, says his party wants to bring about a comprehensive change regardless of the extent of the president’s popularity. If the party depends on one man, down with it,” he confirms.

Perhaps this is an attempt to put some distance between the party and the president and introduce the ruling party in a different way that convinces the Sudanese citizen that this change within the party reflects the change the party wants to set in the country.

Political expert and professor of political science at the Al Neelain University Hassan Alsaaouri believes the successive political events did not significantly affect the popularity of al-Bashir”. 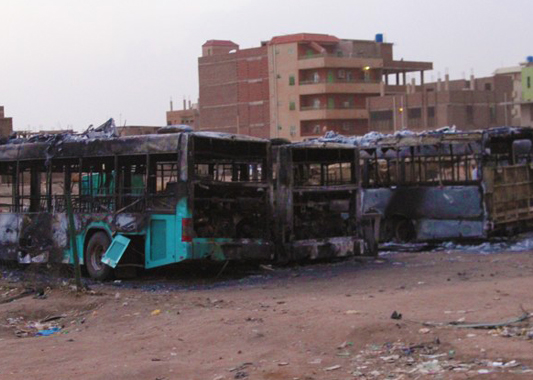 A destroyed bus in Khartoum during the September 2013 protests in Khartoum, following the lift of fuel subsidies, September 25, 2013.
© Niles | Abbas EzzatAl-Bashir is still sacred in the eyes of people. They consider him as the man of the past and next salvation, which makes the ruling party in a dilemma,” Alsaaouri adds.

However, not everyone agrees with this analysis. Political analyst Professor Taieb Zine El Abidine believes that the popularity of al-Bashir has significantly decreased especially after the economic distress, the failure of national dialogue conference, the detention of al-Sadiq al-Mahdi and Ibrahim al-Sheikh, the poor performance of the new government, the catastrophic floods and rains, the corruption of the Khartoum Governor’s Office, the famous issue of cotton and the protection that the corruptors enjoy.

All these factors, Zine El Abidine says, have directly contributed to the president’s decreasing popularity. Election Day is just around the corner and the situation has been showing no sign of improvement,” he adds.

In addition to all of these events which contributed to the president’s decreasing popularity, columnist at Al-Yawm Al-Tali newspaper and political analyst Mohammed Latif says the final blow was the al-Wathba speech. At the end of December and early January, the president reached to what many considered as the summit of ‘calling for change project’ through the al-Wathba speech.

The president now needs to take another exceptional step to recover the decay occurred due to the national dialogue project.”
Mohammed Latif

Many have considered the speech as the way to achieve real change with regard to issues of freedoms, laws and regulations as well as expanding the base of participation.

Unfortunately, the political arena has witnessed a series of turns and meanders that reduced the level of the dream that haunted the people, which led to a decline in the popularity of the president.

In my opinion, the president now needs to take another exceptional step to recover the decay occurred due to the national dialogue project, if not for anything, to regain his popularity which was deeply affected as a result of the foregoing,” Latif says.

Yearning for the village

“We are better off than some”

“The Islamic Movement has, above all, morally failed”
All articles are available for republishing. Please notify us via email when you syndicate our content. Thank you!
© 2020 MiCT, all rights reserved.