In his documentary, ‘Beats of the Antonov’, shown in Canada on Friday, September 5, Kuka challenges Sudan’s limited freedom of expression and shines a light on the nation’s diverse identity.

The film offers an unusual glimpse of citizens at the brunt of state-sponsored wars.

The opening minutes are split between people fleeing from an Antonov bomb and refugees celebrating and dancing in a camp. Their musical instruments are built by the refugees from recycled materials and the lyrics, often composed by the singers themselves, describing war and citizens fleeing. Nuba Mountains, April 27, 2012.
© Marc HoferDisplacement has reinforced the determination of citizens from the Nuba Mountains and Blue Nile State to preserve their culture. Music, dance and Nuba wrestling are central features of life in refugee camps. Thanks to this cultural pride, Beats of Antonov, which could be a gruelling tale, is rendered entertaining and human.

The subject of national identity remains politically divisive in Sudan. Often the remit of intellectuals or politicians, this film makes the dialogue national.

So, for once, the identity debate, which is typically loaded with the language of power politics, is addressed through the universal language of art and culture. It becomes accessible to non-organised citizens in a language or medium they can relate to.

Sudan’s conflicts have complex roots, but one underlying theme is the leaders’ post-independence failure to peacefully resolve the identity issues and manage the country’s diversity. The documentary is largely narrated by refugee camp dwellers from the Nuba Mountains and Blue Nile State and gives a new take on a topic often analysed from the perspective of foreigners. Local religious leaders and traditions also feature in the film, reflecting the region’s religious diversity.

More of Hajooj’s work on The Niles:
Tabanya: Rebuilding lives and homes
by Hajooj Kuka | in SocietyIt also gives a voice to prominent members of Sudan’s civil society. They criticise the regime which 25 years ago arrived with its civilisation project”, bent on erasing diversity and Islamising” and Arabising” Sudan.

Beats of Antonov makes a big contribution towards rebalancing the Sudanese conversation on identity, including cultural, political and religious elements.

Although this it is premiering to an international audience, its real value will come with a screening to audiences around Sudan and its diaspora. As well as fuelling a fresh debate on identity, it will hopefully build bridges of empathy between those urban Sudanese population and diaspora communities who are tightly sealed off from the suffering of the residents of marginalised rural areas and conflict zones. 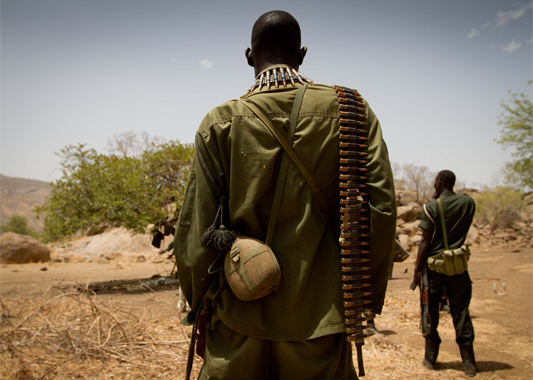 Nuba Mountains, April 25, 2012.
© Marc HoferSudan’s vast geography, poor infrastructure and multiple wars have meant that many parts of the country are living on islands that never intersect. This isolation from the other”, based on fear, state propaganda, dogma and ignorance has cemented stereotypes that foster racism, discrimination, and cultural and social ghettos.

And this is also the reason there is no popular anti-war movement to support the marginalised peripheries, regardless of persistent efforts by Sudanese youth movements since 2009.

‘Beats of the Antonov’ shatters both the dominant narrative and the enforced isolation of Sudan’s regions. It tells an important story which could build bridges and kick start a much needed citizen-based dialogue.

Thanks to the courage of the director, ‘Beats of the Antonov’ documents an under-reported war zone. Against the odds, it leaves its audience with a sense of hope, offering a glimpse of the abundant cultural life in Sudan’s regions, cultures which will flourish once peace is finally achieved.

Beats of Antonov is Kuka’s second feature documentary covering a war zone in his native country. In 2007 he released Darfur’s Skeleton, which focused on explaining the causes of the conflict and the citizen suffering resulting from the war in Darfur. Just like Beats of Antonov, it was completely narrated by its main subjects — Darfuri citizens.

Kuka has an interest in animation, photography and fiction films; and is also an activist and a member of the non-violent youth-based Sudanese resistance movement, GIRIFNA.

His filming style conjures a dreamy magical realism with long grasping moments of silence. He shies away from talking heads, but when used they are powerful and engaging.

Dalia Haj Omar
All articles are available for republishing. Please notify us via email when you syndicate our content. Thank you!
© 2020 MiCT, all rights reserved.