Heavy flooding over a week ago disconnected Twic East, in the north of Jonglei State, from Bor, erasing its commodities supply. 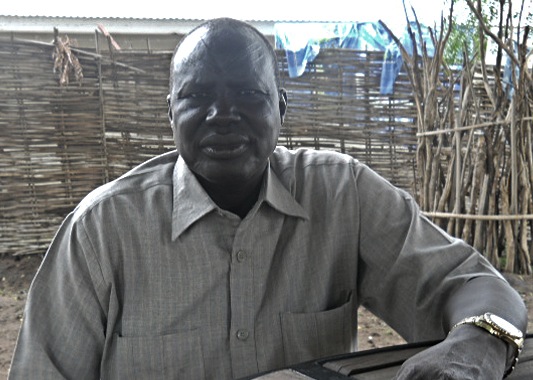 Twic East County Commissioner Dau Akoi Jurkuch, November 9, 2013.
© The Niles | Deng Machol MonyrachTwic East County Commissioner Dau Akoi Jurkuch said that the road is a lifeline for his county. It is a dangerous development for people already suffering the larger crisis in South Sudan,” he said, adding that farmers didn’t plant crops this year given widespread insecurity and risk. Bor is our means of supply, but with the road deteriorated, the situation is unbelievable.”

Dau said that the region will likely face famine soon. The extreme rainfall forced hundreds of families to move their homes to higher land, where there is no food. Dau said at least 500 households have been destroyed so far. "This stopped our supply from the NGOs and the government," Dau said.

The blocked road has triggered a shortage of food and non-food items. Meanwhile, this lack of key goods means that the price of the few available goods has increased out of the reach of most locals.

Food is a first priority of any human being, people should not joke,” Isaac Deng said, a displaced resident in Juba, blaming the political infighting within South Sudan’s ruling party.

Food is a first priority of any human being, people should not joke.”
Isaac Deng

Dau said the last food delivery by aid agencies arrived in July. He urged humanitarian agencies and the State government to respond to the pressing local need. The few locals who planted crops have seen their plants destroyed by rainfall before harvest, he said.

The few commodities available on the local market would not last until September, Dau said, unless assistance arrives soon.