Sudan Votes Music Hopes Album was launched on 25th of March, 2010, at the German Parliament, known in German as the Reichstag. It is a grand building dating back to the 19th century, badly bombed in the second world war and then renovated back to pristine condition with the help of Sir Norman Foster, who designed the stunning spiral domb that enables the public to symbolically look down over the Parliament plenary. 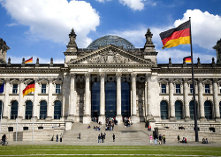 The opening Sudan Votes Album was launched at a cross party parliamentary meeting on Sudan, attended by many NGOs and members of parliament representing the main German political parties.  Among them was Rolf Nikel from the German Chancellery (the Bundeskanzleramt), Johannes Selle, CDU/CSU party, Christoph Strässer, SPD Party, Marina Schuster, FDP Party and Kerstin Müller, aformer Minister of State of Foreign Affairs from the Green Party. Beforehand, the parliament had overwhelmingly passed a resolution urging the German Federal Government to increase its committment to civilian conflict prevention in Sudan.

All the political party representatives stood up and held slogans written on it “Sudan Votes Music Hopes”, with the pictures of a camel and a woman carrying a radio with a ballot box on top. (see above)  This picture gives a different meaning to the German and of course the Sudanese people on how to vote. Their standing on that particular moment in front of the German Parliament with their slogan reflects the importance and pride of the celebration and made it very colorful. It gives real of hope for voting in the forthcoming elections.

Music is one of the important tools for disseminating information to the people; it makes it easy for people to understand any innovation, especially to people of the rural areas, since the majority of them are illiterate. It gives easier understanding to the people in their particular language, or better understanding for their mother tongues than other languages.

The tradition of disemination of information through music is something that has existed in African for many thousands of years.

Sudanese are very familiar with the issue of music. They are good in composing songs, whether with the individual tribesmen or in Arabic language as the main official language especially in the North. In the South some songs in Radio and Television were composed in local languages. Using music for voting will encourage many people to vote and at the same time it promotes election programmes and campaigns. Some people have no time or means to read newspapers, magazines or watch television, but can listen to the songs that push you to vote.

Wahib Soumade from MICT launching the album outside the Bundestag

The tradition of dissemination of information through music is something that has existed in Africa for many thousands of years. In some tribes if a person does something bad or good, a song is written, for the public to know it. Musicians compose songs against the wrong doer or praise them for the good things they did. In this way it reduces crime or any bad acts and promote the individuals in the communities. Also, a few years ago in the Central Equatoria State, during the war period in the South, a group of youth wrote songs on HIV/ AIDS, to inform people about the dangers of the disease and how to prevent it from spreading. This had an affect and a reach amongst the people of Sudan that the written word could not have.

As Sudan is one of the world's poorest countries and many of its people are still living in basic, primitive conditions, there is need for people to use music and not just words to get a message out.

Let this “Sudan Votes Music Hopes launch” be the first of many music promotions across our country in the coming months and years to push for peace and remind ourselves of the commitments we made in the Comprehensive Peace Agreement (CPA).  Hopefully the Sudan Votes album will motivate more musicians to compose songs that can promote culture of peace and harmony, whether our future be one of unity or separation.

The Album was produced by the Berlin based organisation Media in Cooperation and Transition (MICT), compiled by famous German musician Max Herre and funded by the the German Foreign Office.

For many years we shed endless bitter tears, kids carrying guns, and wilding heavy spears.  For my pears and those who have ears I feel a change in the atmosphere, please note come and vote don't let your vote be bought.