Food flown in for humanitarian workers while locals struggle

Food shortages and soaring prices in South Sudan’s capital Juba have highlighted the gap between the wealthy and the poor.

A source from the Zimbabwean Ambassador’s house in Juba revealed that the Ambassador’s food is flown in from his home country. The cost of sourcing, packing and shipping of these foods from Zimbabwe to the Ambassadors house can feed up to 10 local families for a week.

It’s not fair that the people who came to help us are the ones contributing to the rise in food prices.”
Sarah FoniMeanwhile, United Nations Mission in South Sudan (UNMISS) workers have several outlets serving European and continental dishes in and around their camps in Juba, while some locals can’t afford to buy the costly available foods in both the markets and restaurants.

It’s not fair that the people who came to help us (humanitarian workers) are the ones contributing to the rise in food prices so that the locals can’t afford food anymore,” Sarah Foni, a former teacher at Juba secondary school and now a refugee living in Uganda, explaines.

Another South Sudanese, who wanted to be identified as Mark, blamed the government for not stemming the food prices in order to protect locals. Instead of the government controlling food prices, it is increasing taxes on traders and traders hiking prices on the foods. Many people are going hungry and not just for a day but two,” he says.

Behind one of Juba’s UN fences is the FM hotel and Royal Park hotel which serve UN staff Kenyan dishes and European dishes. Many humanitarian workers buy food here, although a meal in one of these restaurants costs up to US$ 25 or more, which could feed a 13-head family in Juba for a day. 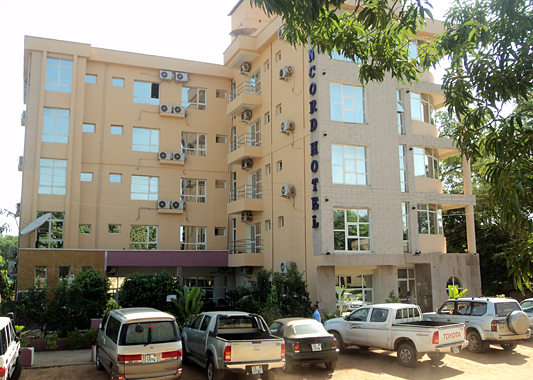 The Concord hotel in Juba, July 4, 2013.
© The Niles | Esther MuwombiMany locals now survive on just one meal a day or on snacks. Mary Lado, a vegetable vendor, says that since food prices increased, she and her six children do not eat enough. Sometimes we drink porridge twice a day with some slices of bread and that’s it. We often do this twice or sometimes thrice a week. It is too costly for us to buy food stuffs for two meals a day,” she says.

Aid agencies are trying to plug the gap between need and availability. The World Food Programme (WFP), for example, purchases more than two million metric tons of food every year. However, questions are being asked about where they source their aid, amid calls for them to make more effort to source foods locally, thus helping local economies. The debate was fanned in 2012 when a Reuter’s news report indicated that more than US$ 85 million of WFP’s aid to feed the starving ended up in the hands of a London-listed commodities trader run by billionaires.

A logistics officer from the UN headquarters in Uganda, who gave his name as Adolf, says that in Uganda, the agency buys its food from local farmers through organised cooperative unions. Since we pledged to buy food locally to support farmers in 2012, we have been buying foodstuffs directly from local farmer associations. Since we buy food in plenty, it is hard for us to buy them form a single farmer or to purchase from farm to farm. This becomes costly logistically. We look out for cooperatives that are local and that’s how we support the local farmers.”

“I had to run”
All articles are available for republishing. Please notify us via email when you syndicate our content. Thank you!
© 2021 MiCT, all rights reserved.