South Sudan has spent at least one billion US dollars on weapons and delivery systems since the fighting broke out, a Bloomberg report wrote last week, citing a western diplomat in Juba.

Read the Bloomberg article:
China Sells South Sudan Arms
as Its Government Talks PeaceThat steep bill would practically cover the US$ 1.3 billion gap that humanitarian agencies say is needed to avert the widespread famine caused by the conflict. 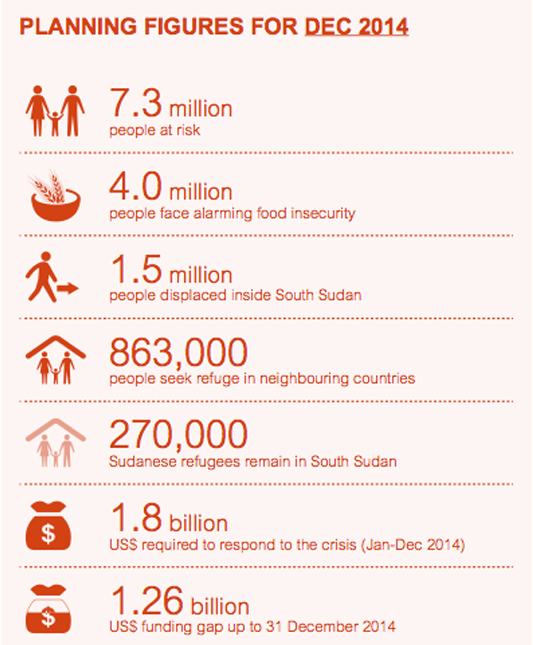 Source: SOUTH SUDAN Crisis Response Plan, May 2014.But as the three-year-old nation is on the brink of acute food shortages affecting up to 4 million people, is the Government of South Sudan arming its people against famine as extensively as it is buying weapons?

Looking at the maths, the figures show that one billion US dollars could go far to assist South Sudanese struggling to feed their families. Dividing that sum between the 4 million who face shortages, would make US$ 250 per person – or roughly enough for each of them to provide for a family for around three months.

If the weapons expenditure was redirected to buy seeds to grow food, it would provide two billion kilos of maize seeds, more than 150 kilos per citizen.

And investing in agriculture has been shown to be vital in helping countries overcome hardship. The Food and Agriculture Organisation (FOA) estimates that GDP growth generated by agriculture can be up to four times more effective in reducing poverty than growth in other sectors. This is especially important in South Sudan where investment in agriculture could save people from starving.

Read Amnesty International’s report:
UN: South Sudan arms embargo
crucial after massive Chinese
weapons transferSouth Sudan could copy the example of Malawi, where a smart” subsidy investment of US$ 258 million was made in around two million farm households. This successfully increased maize production and reduced the poverty headcount ratio from 50 to 40 percent in only two years.

But instead, the Bloomberg report shows South Sudan has opted to divert much-needed funds towards weapons, thus putting more lives at risk in South Sudan.

The death toll, already in thousands — or even tens of thousands — since fighting broke out, looks set to rise further. More people will be hurt and require medical help.

People will continue to flee their homes in fear for their lives, meaning farmers leave their crops to perish and businesses stop working.

China is playing a dangerous diplomatic game with the lives of millions of people in South Sudan. It has pledged to provide peacekeeping troops to protect civilians, and at the same time has sent more than 1,000 tonnes of arms.”
Elizabeth Ashamu Deng, South Sudan Researcher at Amnesty InternationalThis leaves us with the great irony: South Sudan is investing to defend its nation but ends up hurting it.

Some argue that weapons are key to keeping the peace. But this is flawed: After all, the 21-year civil war never brought peace to South Sudan. Only when the fighting parties agreed on peace in 2005 did the war finally end. So funds would be better spent supporting the peace talks to help end the fighting.

And the weapons bill could also have another bad outcome for citizens: Spending on weapons and escalating violence could deter NGOs from operating in needy areas. Then, it will, once again, be the population who pay the highest price, as many lives depend on food aid.

Millions of South Sudanese are waiting, breathless, for direction and leadership.

This latest news of costly defence purchases shows that numerous government officials, who have already borne witness to devastating civil wars in South Sudan, have failed to protect their citizens from a repeat performance.

The Niles
All articles are available for republishing. Please notify us via email when you syndicate our content. Thank you!
© 2020 MiCT, all rights reserved.