Belongings of Returnees drying in the sun, April 7.

Ngor Jeng Achiek, aged 94 was among a group of 85 South Sudanese returning from Sudan to his former home last November. But he did not expect the desperate conditions which awaited him. 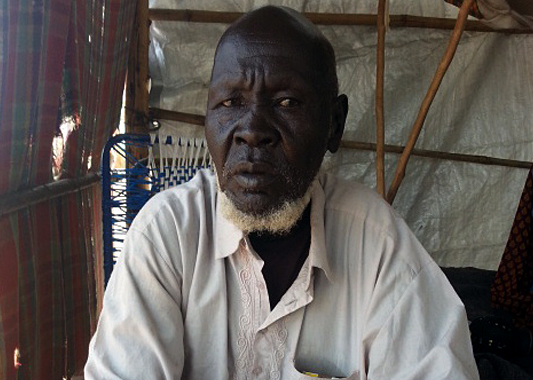 Ngor Jeng Achiek, April 7.
© The Niles | Abraham DaljangWe are in total misery and we don’t know what to do because we lack basics,” said Ngor.

He and his fellow returnees were stationed in Rumbek under the care of the United Nations. At the beginning, he could not even access plastic sheets to use as tents and other basic necessities. After six months the group was reintegrated into their respective communities where conditions remained dire.

Most South Sudanese, repatriated by the International Organisation for Migration (IOM), were looked after by the UNHCR upon their return to their country. According to an IOM report dated May 2012, a total of 5,972 people were airlifted from Khartoum to Juba in South Sudan, and the organisation increased it from two daily flights to four times a day in order to repatriate the large number of South Sudanese. William Mabor Mading, April 7.
© The Niles | Abraham DaljangWith rainy season approaching, the situation is expected to deteriorate for new arrivals who lack shelter. William Mabor Mading, chief of one of the camp’s divisions, told The Niles that their bedding was soaked by heavy rain because they had no roof. The new arrivals tried to dry out piles of blankets and bed sheets in the sun after the previous night’s downpour.

Since returning to their communities, the returnees have little hope of getting hand-outs like sheltering materials (which they used to receive from the UNHCR). Around 950 returnees settled in Nyangkot but they do not have toilets but use bushes, which could trigger an outbreak of waterborne diseases like cholera and typhoid when the rainy season approaches.

With only two boreholes in the settlement, newcomers and locals struggle to access the scarce water. The long queues sometimes lead to fighting among the women who traditionally fetch the water. 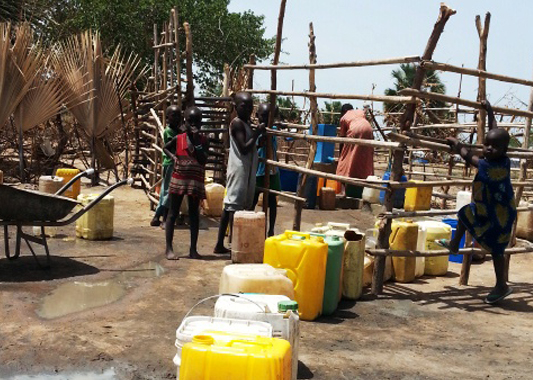 Children queuing to fetch water, April 7.
© The Niles | Abraham DaljangWe don’t have enough water and we appeal to the government to provide more boreholes, two cannot be enough for this high population,” said Mading.

Fear of attacks by unknown thugs who loot their properties at gun point also threatens the struggling settlement. There is no police station nearby and people remain vulnerable.

Akur Bol, a 50-year-old woman, was among those attacked. They came at around midnight with torches and they warned that they would shoot me if I shout, they searched my tent and when they did not find something, they moved out pointing their guns at me,” she said.

Lakes State has also witnessed ongoing clashes between communities and guns are in free circulation in the hands of cattle keepers. Revenge attacks and home robberies are commonly reported but nothing is done by the police. 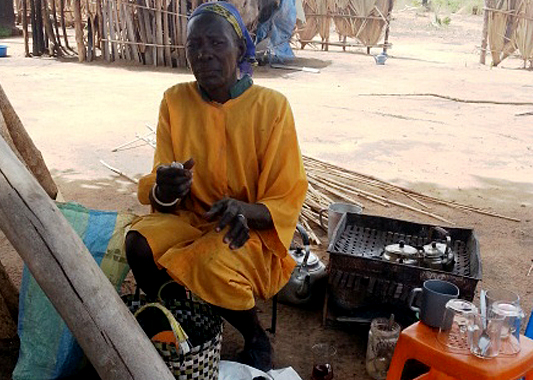 Akur Bol, April 7.
© The Niles | Abraham DaljangReturnees children walk around 20 kilometres every day to attend schools in town. They also face a language barrier, as most of them studied Arabic in Khartoum and they are educated in English. This can keep children out of school, according to John Kuc Mangek, who came to Rumbek in November 2013 with his wife and nine children. He said both the language barrier and the distance to school meant that his children had stopped their education.

But not all of the returnees regret their move to South Sudan and some still hold out hope for access to basics. Home is always the best, here we can live as first class citizens even if we are suffering,” said Rebecca Ajok, a 50-year-old mother of three who spent about a decade in Khartoum.