There should be peace and security in South Sudan,” said Bashir, whose regime fought over two decades of civil war with South Sudan that ended in 2005, after the meeting.

Speaking to the press at Kiir’s Presidential Palace, J-One, he underlined the importance of the bi-lateral bond. We come so that we see what we can do […] so that we bring peace to our brothers and sisters in South Sudan,” Bashir said. 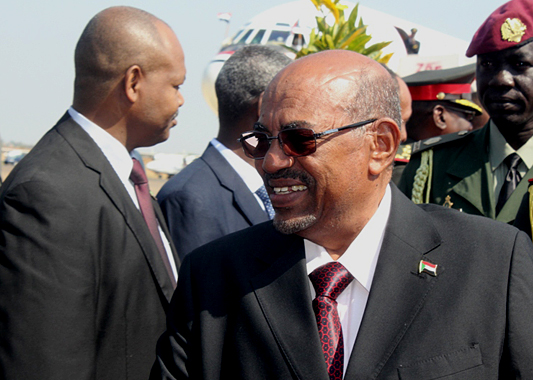 Omar Hassan al-Bashir in Juba, Monday, January 6.
© The Niles | Waakhe Simon WuduHe said many” South Sudanese displaced by the recent crisis have sought refuge in Sudan. He pledged he would protect these refugees and would give them access to basic services.

The United Nations estimates that around 200,000 people have been displaced. Over 1,000 have died so far in the violent conflict.

Since the outbreak of clashes, Bashir is the forth Head of State to visit South Sudan, following the Ethiopian Prime Minister and the Kenyan and Ugandan presidents.

Government and rebel delegations convened in Addis Ababa for peace talks. Despite their expressions of support for a ceasefire, heavy fighting has continued to rock two of the country’s states: Jonglei and Unity states.

SPLA Spokesman Philip Aguer said the SPLA and the rebels are locked in four days of heavy fighting around Bor capital of Jonglei State, which was seized by the rebels on December 31, 2013.

Aguer said the SPLA and the rebels are currently clashing in Pariak [about 15 kilometres from Bor]. Our forces are advancing towards Bor,” Aguer added.

He said on Saturday the SPLA managed to flush out rebels who launched attack at Adar oil fields in Unity State. He also said SPLA are advancing from the northern part of Bentiu to recapture the town since seized by the rebels.

Bashir’s visit came against a backdrop of scant progress at the peace talks between South Sudan government delegation and rebels loyal to Riek Machar.
The convention of the talks came following mediated efforts of the Intergovernmental Authority on Development (IGAD) to end the hostilities between the warring parties. The delegations have started face-to-face talks.

Progress remains slow as President Kiir had earlier on insisted on unconditional talks with the rebels while his opponents demanded release of 11 senior politicians currently in detention in Juba on allegations that they were behind the foiled coup attempt.

Observers have expressed concern over deteriorating political and humanitarian conditions in the country as the crisis escalated. Humanitarian aid agencies cannot access the thousands of displaced persons and many roads are blocked.

The government on Sunday said it cannot allow aid agencies to travel to rebel controlled areas of Bor and Unity State, putting civilians at risk of a lack of basic provisions.

Meanwhile, the US Secretary of State John Kerry welcomed the peace talks but stressed they must commit to the talks.

Both parties need to put the interests of South Sudan above their own,” Kerry told reporters in Jerusalem reported the AFP. The beginning of direct talks is a very important step, but make no mistake it is only the first step. There is a lot more to do.”

Negotiations have to be serious, they cannot be a delay, (a) gimmick in order to continue the fighting and try to find advantage on the ground at the expense of South Sudan,” added Kerry.