Bor in tatters after government forces reclaim town from rebels

Civilians in Bor returning home after a week in refuge at the UNMISS compound in Jonglei State’s capital, Dec. 25.

Locals were left to pick up the pieces after violence which has killed scores of people, soldiers and civilians alike, although details of the protracted battles between the two warring groups remain unclear.

This week civilians returned to their houses after a week spent hiding in bushes or in the United Nations’ compound.

She said she has been sheltering at Bor hospital since the rebels took the town in mid December.

Before South Sudan became independent in 2011, the region was devastated by Africa’s longest civil war, which spanned decades.

The Niles Correspondent saw four civilian corpses and two bodies in soldiers’ uniform still lying around the market area and along the road towards the airport.

Smoke continued on Wednesday, December 25, to hang above Bor market, which authorities said had been burnt by the rebels. Glass was shattered and shops were emptied by looters and the Kenyan Commercial Bank (KCB), was also set a blaze. 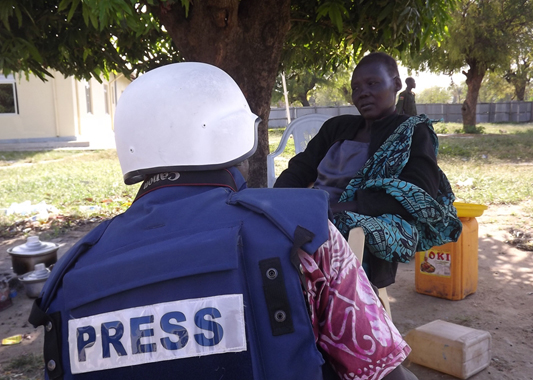 Waakhe Simon Wudu interviewing Rebecca Acien Kur Diing at Bor Hospital, Dec. 25.
© The Niles | Samir BolThe market had been the epicentre of heavy shooting between the South Sudanese army, the SPLA and the rebels.

Looting continued in the centre, with hundreds of civilians loading mattresses, chairs, utensils onto their heads, bicycles, motorbikes and vehicles.

SPLA’s Philip Deng was among the soldiers who recaptured the town from the rebels. I have been without food for four days as we were brought from Juba,” Deng said, looking out across Bor’s destroyed market, his clothes caked in dust.

Government buildings, including part of Bor’s main hospital were destroyed in the clashes, actions which locals described as the devil’s work”.

All goods and services are destroyed,” said Ogato. ”We want the international community to supply all the population with food and basic needs.”

These allegations of looting are not true,” Moses Ruai, the Interim Spokesman of the rebels in control of Unity State told The Niles on Friday. He called for an independent body to verify the claims. 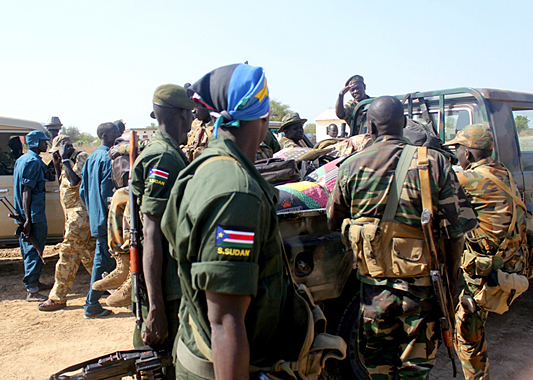 Sudan People’s Liberation Army (SPLA) forces at Bor airport after recapturing the Jonglei State capital from forces loyal to Ex-VP Riek Machar, Dec. 25.
© The Niles | Samir BolFollowing the seizure of Bor town by the rebel forces on December 17, 17,000 civilians are reported to have taken refuge at the UNMISS compound, trying to escape from the violence.

The fighting in Bor is just one of a spate of violent clashes triggered by what South Sudanese President Salva Kiir dubbed a coup attempt on December 15.

Ex Vice President Riek Machar has officially refuted government claims that he and other senior politicians masterminded a coup.

The violence has killed an estimated 1,000 people, affecting half of South Sudan’s 10 states.