'Fundamental Change' is the title of the election manifesto of Lt. Gen. Alfred Ladu Gore. He is an independent candidate campaigning for the governorship of Central Equatoria State, adding to the big question emerging out of the south: will the independent candidates challenge the SPLM monopoly? 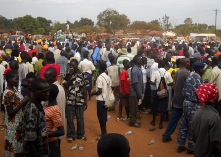 Like many independent candidates, Lieutenant Gore was formerly an SPLM member.  This week he told his huge audience in Yei that he has kept his SPLM membership which he got in 1984, even though now he had taken the chance to run as an independent candidate for Governor of Central Equatorial State.  Gore told people that over the years he helped popularize SPLM/A all over the world. But in spite of his efforts he was always treated unfairly. And that is the reason he decided to be independent from the SPLM. I stepped out because I wanted to fulfill the demands of my people” he insisted.

Mr. Kaliso Ladu Fasitino, the general secretary for the 'Fundamental Change' campaign told people that they want to put things in order by starting to enforce the law which is so often disregarded  Things have got out of hand" he said.  To some people's surprise Gore had to get on his hands and knees in order to receive a blessing from an elder for his campaign. This was a sign of blessing him and wishing him all the best of luck in the up coming elections. Gore who requested to speak in Bari language and have everything translated in Juba Arabic was surprised when he found that everybody in Yei speaks Bari anyway and so he spoke to them in his mother tongue.  In his speech he urged people to vote for him, telling them, I want to make life better. And that is the change everyone needs and deserves." He said that the current government has placed people with their own self interests in senior government positions. And that it is these people who are making the country lag behind in terms of development and standards of living. He said that Central Eqatorial State (CES) is estimated to have about two million people under one Governor. And he said, "We will not let this one person who has self interest ruin the life of many people. I would rather die. "He told the people that he and others have written and forwarded many petitions to the government requesting better governance. But nothing happened. "No matter what, change will come. Nothing remains the same. Things change. And Fundamental Change is here to change everything" 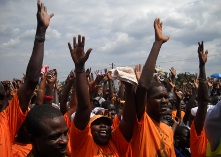 Gore supporters responding to his speech in Yei

A passage from the 'Fundamental Change' manifesto reads:

"Since the signing of CPA and the consequent formation of the current CES government, the people of CES and the residents of Juba town in particular had high hopes that the quality of their lives would be improved. Unfortunately, the CES government, lacking comprehension of the New Sudan vision, could not deliver to realise these hopes, but has totally failed to address the below mentioned issues:  security, unity of the people, good governance, employment, economic development, social services, housing and infrastructure, rural development, agriculture and food security, empowerment of women and millennium development goals (MDGs)"

Only time will tell as to the impact these new independent candidates will have at the polls in April.