Alcohol: A booming business and its side effects

The women brewing and distilling alcohol in Unity State say they do not get rich from brewing a local beer called ‘Kongchar’. However, they are able to earn enough money to feed their families and send their children to school.

Nyager Gatkuoth, who lives in Rubkona County’s Chilaak village, says she has been brewing alcohol for the last 14 years. The reason why I brew alcohol is because my children suffer a lot as there are no other job opportunities. Making this alcohol has enabled me to send them to school and make money to buy them food,” she adds. 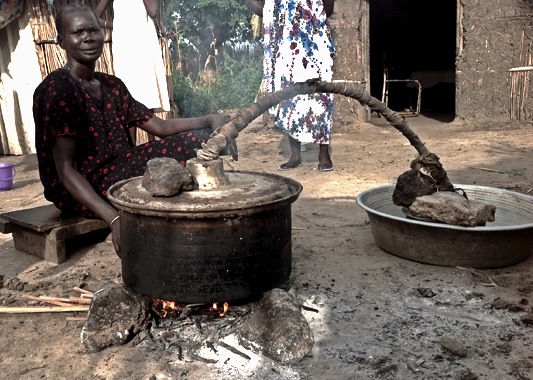 Tapitha Nyataba Mayang distils alcohol in Bentiu, September 30.
© The Niles | Bonifacio TabanTabitha Nyataba Mayang, a 35 year old woman from Bentiu says most women are forced to brew and sell alcohol, because there are simply no other jobs. Most of these women in the area make alcohol because of the difficulties they face, as a majority of them lacks jobs.”

Lack of good service delivery is another problem that has forced women to brew alcohol. They need money to take their children to hospital when they fall sick,” adds Mayang.

Nyakume Chuol lived in Khartoum before returning to Unity State following South Sudan’s independence. Chuol says after her husband’s death in 1996 she began brewing alcohol in order to earn money to care for her five children.

I make this alcohol because these children have no father. The alcohol is my second husband after the death of my husband. I prepare it to get some money to feed them. And I have done this for a long time -- since I moved to Khartoum”, says Chuol.

The business of locally brewed alcohol booms within towns, creating competition among the brewers. The sign that ‘Kongchar’ is available is a black flag in front of the house or the gate of the fence.

The reason why I brew alcohol is because my children suffer a lot.”
Nyager GatkuothHowever, the availability of locally brewed and cheap alcohol increased consumption in communities across South Sudan. Many believe that the increased consumption of alcohol contributes to domestic violence and has negative effects on the consumer’s health.

In South Sudan’s Lakes State the local government banned both alcohol production and consumption in a bid to clamp down on cattle raids.

Agook Mayek comments in the Sudd Institute’s Weekly Review: In addition to alcohol consumption being one of the likely causes of crimes in the state, it also carries other elements of negative social effects, like breakdown of families, where individuals squander money    in debauchery and fail to meet their families’ obligations, as well as leading to jobs loss.”

But these possible side effects are of no concern to the women in Unity State and elsewhere in South Sudan, who only try to make ends meet.