Dozens of protesters killed, internet switched off in Sudan’s worst unrest in years

A bus burning in Omdurman following violent protests on September 25.

News agencies reported that up to 30 people were killed in extended unrest, but sources on the ground have told The Niles that the death toll is likely much higher.

The Niles correspondents filed the following updates, working around the communications blackout:

On Wednesday, September 25, there was a massacre in Khartoum and neighbouring areas. Sources who have been to morgues and hospitals suggest that far more than 30 people have been killed. Maybe two or three times as many. People died in Omdurman as well as in Khartoum Bahri.

Farouk Abu Issa, Chairman of the opposition National Consensus Forces, said that security agents threatened opposition leaders this morning, Thursday, September 26, in front of the Ismail Al-Azhari’s house in Omdurman, forcing them to cancel their meeting.

Angry demonstrators burned as many as 20 gas stations across Khartoum. Protesters torched 10 police cars, two police stations, three buildings belonging to the ruling National Congress Party (NCP), one bank and more than a 10 civilian vehicles near the Salam Rotana Hotel, which is owned by ruling party loyalists. A number of ATMs were also destroyed.

The authorities have shut down schools for a week and evacuated students from boarding schools. Tight security has been imposed around banks and NCP buildings: They fear more attacks by demonstrators.

Politicians and people here are still in the dark about what is going on. In this situation we need to uncover the truth. We need to stop the massacre.”

A correspondent who declined to be identified reported on Thursday, September 26, from Omdurman (the city on the opposite bank of the Nile from Khartoum):

Rishan Oshi, another The Niles correspondent from Omdurman confirmed on Thursday, September 26:

Demonstrations are ongoing in Omdurman. We can still hear the sound of bullets now.”

Our internet was cut off completely for hours but it is back up now. Today things are quiet, very quiet. But there are fears that tomorrow (Friday, September 27) it will kick off again and people fear the internet will be switched off .

Some neighbourhoods are short of basics.”Now authorities have deployed more security forces in the streets of Khartoum. Rumour has it that they will put police vehicles in front of the gates of mosques across the capital on Friday. The expectation is that protests will flare up when worshipers exit Friday prayers.

In addition, the capital is in the throes of a fuel crisis. One-third of our petrol stations were shut down amid fears they may be burnt down or because they ran out of fuel. Authorities have blocked off gas stations by installing members of the military and police force.

Some neighbourhoods are short of basics. In some areas citizens are pushing each other out of the way to get bread.

Three newspapers did not go to press on Wednesday because they refused to deliver a one-sided report on the demonstrations, as demanded by the security forces. The Security forces prohibited them from mentioning the death toll or from writing about how the security acted during the protests.” 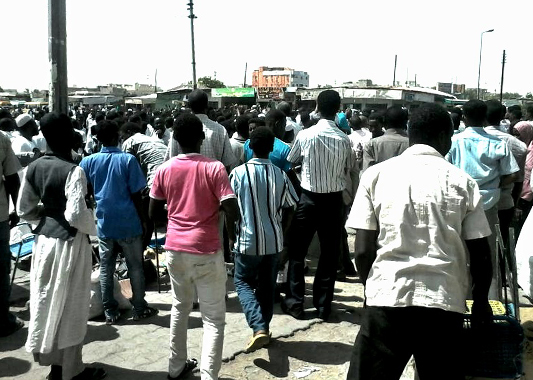 Protesters in Port Sudan on Thursday, september 26.
© The NilesThe protests in Port Sudan began on Wednesday, September 25, with dozens of people protesting near the central market. Students from the Red Sea University and as well high school students joined the demonstration.

The police responded with tear gas, dispersing protestors up to 4:30 in the afternoon. The situation has led to a complete paralysis of the transport system in the city until Wednesday evening.

Today, Thursday, September 26, the protests began at 11:00 in the morning. The police dispersed the demonstrators again by firing tear gas, the traffic was again paralysed and a number of students and activists were arrested.

Demonstrators during yesterday’s and today’s protests were chanting slogans such as ‘No to high prices’ and ‘the people want to overthrow the regime’.”

We do not fear or feel embarrassed by these protests but we condemn all protests that damage public properties or individuals and their rights.”

An expatriate living in Khartoum spoke to The Niles anonymously from Khartoum:

I am in Al-Riyad, now things are quiet here. The gas stations are all out of gas, even though some still had diesel. Embassies and UN advises staff to keep movement to a minimum and to avoid high-profile places like the Rotana (which was attacked yesterday) and Ozone.

On Thursday there were protests locally. We saw smoke coming from different directions from the roof. There were lots of burning tires and we heard shots.”