Under the leadership of retired General Matur Chut Dhuol, the State Government in February banned the brewing of local alcohol and consumption of the sorghum-based beverage in local bars. Many citizens voiced anger at the move, calling it an import from Khartoum and blaming the State Government for indirectly imposing Sharia laws.

The State Governor started tackling alcohol consumption, which he says boosts insecurity in the State, particularly among cattle keepers who become violent after drinking.

However, among those affected by the law were women, especially single mothers and widows, who brew local alcohol, called Siko” in Arabic or Mau Chol” in Dinka, to earn enough to live. The move to outlaw it has hit them hard, in some cases making it impossible to buy enough to eat. 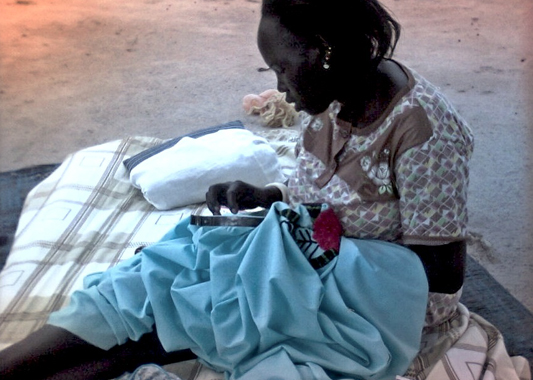 Veronica Nyilok, knitting and decorating bedsheets as an alternative for her survival after the ban of alcohol brewing in Lakes State, July 14.
© The Niles | Abraham DaljangLife has become hard now, I cannot finish building my small house and I cannot even afford 20 kilogram of maize flour,” said Veronica Nyilok, a single mother of four children. The law came out when I had put ten jerrycans of local brew for fermentation and before I cooked it, the police came and poured it away: I have incurred a great loss.”

She said brewing alcohol from sorghum, yeast, and sugar used to buy her daily bread but she is now destitute. She makes meagre earnings by sewing pictures on bed sheets, but not enough to support her family.

However, religious leaders welcomed the alcohol ban, blaming drinking for moral decay. We can now have peace of mind because alcohol was causing a lot of damage in our society,” said Samuel Kedit Chol, a pastor of the Episcopal Church of Sudan, Rumbek Diocese. Families were breaking up, children and women were beaten by the drunkard men.”

He urged women who formerly brewed alcohol to find another source of income.

Families were breaking up, children and women were beaten by the drunkard men.”
Samuel Kedit CholBut it remains unclear whether the ban has reduced the frequency of violent attacks. Early signs suggest no simple legal solution can halt the upsurge in violence.

On July 11, for example, a man was shot dead in the Project Development Centre (PDU) in the early hours of the morning, just a few metres away from the State Legislative Assembly.

Amid a vicious cycle of revenge attacks, two primary teachers were killed in Rumbek East in early August and the culprits are still on run.