Victims of the clashes in Pibor County receive treatment in Bor, July 15.

Around 69 of those transported to the Jonglei State capital for treatment by aid agencies and the UN were under eighteen years old, he said, adding that 80 were wounded from gunshots.

No clear details have emerged on how many people have died in the violence. A 42-years-old injured victim, Tut Mut from Uror County, said they had killed many people in response to the killing of children, women and elderly in cattle raids in the Walgak area in February 2013. The attacks on Pibor over the last week were in retaliation to what happened,” Mut told The Niles in hospital. 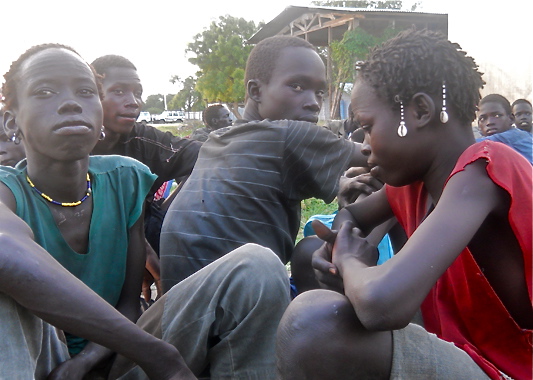 Youth displaced by the conflict in Pibor County on July 14, in Bor.
© The Niles | Deng Machol MonyrachThe region has been shaken by ethnic clashes and military attacks on a rebel insurgency against the central government.

A UN statement said fighting in Pibor has forced thousands to flee to the bush and it urged the factions to enable aid organisations to reach those in need. On Sunday, July 14, aid groups were able to reach Pibor, the focus of the violence.

The ethnic fighting has broke out around Nanaam river, Tangnyang village and Lilibok river in Pibor on July 8, while the country was gearing up for its second anniversary of independence.

UNMISS has gained access to Pibor County to monitor the clashes at Nanaam. However, rainfall and the remote sites of the clashes have hampered access for both the government and UN agencies.

Aid workers and rights groups have accused both the South Sudanese military and Yau Yau’s rebel group of abusing civilians and denying them access to humanitarian assistance. The US Embassy in South Sudan has criticised the central government for not doing more to stop the clashes.

Those wounded and moved to Bor were all from Lou-Nuer youth, who clashed with the Murle of Pibor County.

Yeen Gai, a 15 year old, said he joined the fighting to try and get back his sister and cattle who were seized by Murle tribesmen in May. Speaking to The Niles, he said he expected the fighting to continue until there was a clear victor.

The military spokesman Col. Philip Aguer Panyang confirmed the recent clashes. He said the army is fighting with rebels loyal to David Yau Yau but argued that they cannot leave the battle in order to separate and protect civilians.

In February, 114 civilians and 14 soldiers were killed while the Lou Nuer cattle youth migrated toward Ulang in Upper Nile State in search of pastures and water for their cattle.

Country Defence Minister John Kong Nyuon assured the population that government was working to separate the two rivals, involving key leaders from the Lou Nuer and Murle communities. We will do the needful as a government to protect civilians and their properties, and then call on them to move to areas where SPLA will provide protection,” the minister said speaking on SSTV.

The UN meanwhile has expressed concern about the violence. UNMISS calls on the leaders of all Jonglei communities, their youth, as well as national and state authorities to exercise maximum restraint and urgently engage in reconciliation efforts,” the mission said in a statement calling on the government, traditional leaders and communities leaders in Jonglei to urgently end the cycle of violence.

Medicine Sans Frontiers (MSF), the UN’s World Health Organisation (WHO), Korea-UNMISS battalion in Bor and international committee of the Red Cross (ICRC) have collaborated with the state government and sent a team of doctors to Bor Hospital to help treat the wounded.